Editor’s Note: While there is much more supporting the idea that this was a staged attack, we should not take any government at its word, until verifiable evidence can be produced one way or the other. However, in that regard, Russia has shown its hand where others have not, claiming to have “irrefutable evidence” that the UK staged the entire event, and holding a conference outlining what it feels is evidence to support its claims. Conversely, France and the US are now similarly claiming to have “proof” that the Syrian government is behind the alleged attack, yet oddly fails to produce any such proof, and has not revealed or even suggested what that proof might be or if it even exists. As always, be cautious and skeptical of all sides, especially while some admit to having no evidence, even while making accusations nonetheless and moving forward with military shows of force.

As the blame game over the alleged chemical attack in Syria escalates ahead of what is expected to be an imminent, if contained, air strike campaign by the US, UK and/or France against Syria, on Friday morning, Russia’s foreign minister Sergey Lavrov said Moscow had “irrefutable evidence” that the attack — which allegedly killed more than 40 people in an April 7 chemical weapons strike on the former rebel outpost of Douma — was staged with the help of a foreign secret service.

“We have irrefutable evidence that this was another staged event, and that the secret services of a certain state that is now at the forefront of a Russophobic campaign was involved in this staged event,” he said during a press conference according to AFP.

Quoted by Reuters, he said: “We have… evidence that proves Britain was directly involved in organising this provocation.”

As RT further adds, the Russian Defense Ministry presented what it says is “proof that the reported chemical weapons attack in Syria was staged.”

It also accused the British government of pressuring the perpetrators to speed up the “provocation.” During a briefing on Friday, the ministry showed interviews with two people, who, it said, are medical professionals working in the only hospital operating in Douma, a town near the Syrian capital, Damascus.

During a briefing on Friday, the ministry showed interviews with two people, who, it said, are medical professionals working in the only hospital operating in Douma, a town near the Syrian capital, Damascus.

In the interviews released to the media, the two men reported how footage was shot of people dousing each other with water and treating children, which was claimed to show the aftermath of the April 7 chemical weapons attack. The patients shown in the video suffered from smoke poisoning and the water was poured on them by their relatives after a false claim that chemical weapons were used, the ministry said.

“Please, notice. These people do not hide their names. These are not some faceless claims on the social media by anonymous activists. They took part in taking that footage,” said Konashenkov.

“The Russian Defense Ministry also has evidence that Britain had a direct involvement in arranging this provocation in Eastern Ghouta,” the general added, referring to the neighborhood of which Douma is part. “We know for certain that between April 3 and April 6 the so-called White Helmets were seriously pressured from London to speed up the provocation that they were preparing.”

According to Konashenkov, the group, which was a primary source of photos and footage of the purported chemical attack, was informed of a large-scale artillery attack on Damascus planned by the Islamist group Army of Islam, which controlled Douma at the time. The White Helmets were ordered to arrange the provocation after retaliatory strikes by the Syrian government forces, which the shelling was certain to lead to, he said.

The UK rejected the accusations, with British UN Ambassador Karen Pierce calling them “grotesque,” “a blatant lie” and “the worst piece of fake news we’ve yet seen from the Russian propaganda machine.”

One of the interviews published by the ministry showed a man who said his name was Halil Ajij, and who said he was a medical student working at Douma’s only operational hospital. This is how he described the origin of the footage:

“On April 8, a bomb hit a building. The upper floors were damaged and a fire broke at the lower floors. Victims of that bombing were brought to us. People from the upper floors had smoke poisoning. We treated them, based on their suffocation.”

Ajij said that a man unknown to him came and said there was a chemical attack and panic ensued. “Relatives of the victims started dousing each other with water. Other people, who didn’t seem to have medical training, started administering anti-asthma medicine to children. We didn’t see any patient with symptoms of a chemical weapons poisoning,” he said.

The first photos claiming to show the aftermath of the alleged chemical attack on April 7 were published online on the same day, and featured the bodies of many people, including children, some with foam around their mouths and noses. Footage from the hospital was released on Sunday, with the sources behind it claiming that it had been shot on Saturday.

Konashenkov said Russia hoped that international monitors from the Organization for the Prohibition of Chemical Weapons (OPCW), which is due to investigate the circumstances of the incident, will help establish the truth. He added Eastern Ghouta is currently trying to return to peaceful life after being liberated from militant groups by Syrian government forces. He called on other nations and international organizations to provide humanitarian aid, which is badly needed in the area. Russia is already supplying food, medicine, building materials and other essential supplies to the neighborhood, he said.

Residents of the neighborhood, who previously fled violence, are returning to their homes now that the area is relatively safe, the Russian official said. The latest reports from the ground say about 63,000 people have returned, which is over half of the displaced residents, he added.

The reported chemical weapons attack escalated tensions over Syria, just as Damascus was about to seize full control of Eastern Ghouta. The US and allies such as the UK and France threatened military action in response to what they claim is an atrocity committed by the Syrian government. Russia insists the incident was staged and said it reserves the right to counter any attack on Syria.

RT also spoke about the Russian claims with Lord Alan West, a retired officer of the British Royal Navy. He said he had strong reservations about taking allegations against Damascus at face value, because it didn’t make much military sense.

“It seems to be utterly ludicrous for the military that is in the process of taking over an area to go and do something with chemical weapons, which will draw the wrath of the larger enemy down upon them,” he said. “If I was advising the opponents of [Syrian President Bashar] Assad, I would be delighted to kill a few people there. Let’s face it, [the insurgents] don’t care if they kill women and children.”

“I am not willing to accept tweets. We need to see incontrovertible truth about what has happened there and make a decision on that basis,” he added.

On Wednesday, Russia made the first allegation that the chemical attack was staged by Western powers, in this case by the infamous “white helmets,” a US-funded NGO lauded by mainstream media for their humanitarian work, while long-suspected of performing less-than humanitarian deeds behind the curtain.

“But we’ve seen them on the video!” responds EuroNews correspondent Andrei Beketov. “There was no chemical attack in Douma, pure and simple,” responds Chizov. “We’ve seen another staged event. There are personnel, specifically trained – and you can guess by whom – amongst the so-called White Helmets, who were already caught in the act with staged videos.”

Russia said previously that it sent experts in radiological, chemical and biological warfare – along with medics, in order to inspect the Eastern Ghouta city of Douma where the attack is said to have taken place.

In any case, if Russia indeed has “irrefutable evidence”, it is probably just a matter of time before it is made public in an attempt to sway public opinion, ideally before the Syrian airstrikes begin afresh. If confirmed, it would be a major slap in the face of neo-con forces across “western democracies”, if hardly a shock: after all the US using a fabricated pretext to wage war or simply to effect a much needed distraction from domestic affairs, in the middle east is a painfully familiar narrative. 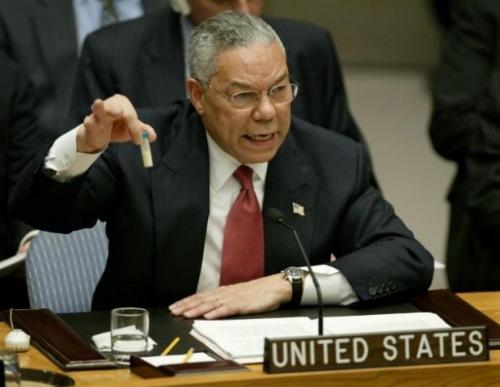 Meanwhile, as we wait for Trump to announce what happens next, late on Thursday we reported that US National Security Advisor John Bolton and Defense Secretary James Mattis are reportedly feuding over the strategy in Syria, with Mattis favoring a more cautious approach, even as France and Britain are crafting broad strike plans and are willing to pursue any military strategy, even though as noted, a readout of a Thursday phone conversation President Trump and UK Prime Minister Theresa May suggests that military action may be days away, instead of hours.

WikiLeaks’ latest tweet has the potential to destroy the Democrat Party’s narrative that the election of 2016 was corrupted by Russian election meddling. The news agency detailed the contents of the book “Shattered” — written by Jonathan Allen — and it makes some damning accusations. The work details former Secretary of State Hillary Clinton’s presidential loss to Read More…

Welcome to The Daily Wrap Up, a concise show dedicated to bringing you the most relevant independent news, as we see it, from the last 24 hours (11/18/19). As always, take the information discussed in the video below and research it for yourself, and come to your own conclusions. Anyone telling you what the truth Read More…

How Big Data is Engineering Your Life

“I’ve got no strings So I have fun I’m not tied up to anyone They’ve got strings But you can see There are no strings on me!” –Pinocchio Pinocchio is the story of a marionette that dreams of becoming a real boy. He wishes upon a star, proves himself brave, selfless and true, and a Read More…