Saudi citizens have studied in the U.S. for years – but a new report states that approximately 400 of them have left the country after arrival to join terrorist groups like ISIS. There is evidence that both Saudi and U.S. officials knew of this issue for some time, but refused to do anything about it.

WASHINGTON, D.C.– A newly released investigative report from the Institute for Gulf Affairs (IGA) based in Washington, D.C. details what they have referred to as “one of the biggest terrorist threats against the United States homeland.”

The report “From American College Campuses to ISIS Camps: How Hundreds of Saudis Joined ISIS in the U.S.” describes how Saudi nationals living in the U.S. have left to join internationally-recognized terrorist groups like Daesh (ISIS) and al-Nusra in large numbers – a fact that was known to top Saudi government officials but was intentionally never shared with the U.S. government.

The investigation found that approximately 400 Saudi and Kuwaiti citizens who were living in the United States – most of whom were studying abroad on Saudi government-issued scholarships – later left to join terrorist groups. Many of them are U.S.-Saudi dual citizens who were born in the U.S. while their parents studied abroad.

The figures given in the report assert that Saudi nationals comprise the largest number of U.S. residents who have left to join terrorist groups fighting in nations like Syria and Iraq. In general, Saudi citizens constitute the largest foreign nationality within Daesh and the group itself is known to receive large amounts of funding from prominent Saudis, as well as the Saudi government itself.

Saudi government officials actively colluded to hide this information from U.S. authorities, as well as obfuscated the ties that some of its citizens had to radical groups prior to their entrance into the United States. The report names several Saudi officials who knew of such Saudis living in the U.S., including Saudi Crown Prince Mohammed bin Nayef and Saudi Foreign Minister Adel al-Jubeir.

It also notes that the Saudi government possesses “one of the most sophisticated systems” for tracking the movements of its citizens between countries, including mandatory fingerprint verification for all citizens who receive government services. The government has been known to deny services to citizens for offenses as minor as unpaid traffic tickets. Clearly, the Saudi Interior Ministry was aware of Saudi students living in the U.S. and elsewhere who abandoned their scholarships to take up arms with Daesh and similar groups.

But in addition to the silence from Saudi Arabia concerning the issue, several U.S. officials – who were informed well in advance by the IGA of the growing number of Saudi nationals within the U.S. who had joined Daesh’s ranks – failed to act on the information once informed. The report states that the FBI failed to notice the trend of Saudi nationals leaving the U.S. to join terrorist groups, a failure that the report’s author Ali al-Ahmed told MintPress News was likely due to negligence.

In April 2014, the report notes that IGA representatives met with two FBI special agents, as well as Obama administration official George Slim, to share information regarding the troubling phenomenon. However, Slim and the agents became unreachable following the meeting.

The close personal relationship of former CIA Director John Brennan to the Saudi monarchy, as well as the fact that former FBI director Louis Freeh was paid nearly $1 million to represent a Saudi official in an international corruption case, were cited as possible reasons for the Obama administration’s lack of interest in pursuing the issue. Neither the FBI nor the White House ever shared the information with the State Department, which was unaware of the issue until IGA contacted them in May prior to the report’s release.

One example of the U.S. State Department’s apparent lack of knowledge regarding the connections Saudi nationals have to terrorist groups was its issuance of a visa to Saudi cleric Saad al-Durihim in 2016. al-Durihim is an open supporter of Daesh and al-Nusra who once urged Daesh to massacre Shiite women and children in Iraq and called for the U.S. to fall prey to Saudi Wahhabists.

Despite al-Durihim’s ties to the two groups, he was allowed entrance to the United States in December 2016 to attend his son’s graduation ceremony at Shawnee State University in Ohio. His son, Yaser al-Durihim, was permitted to study in the U.S., despite his father’s ties to extremist groups. 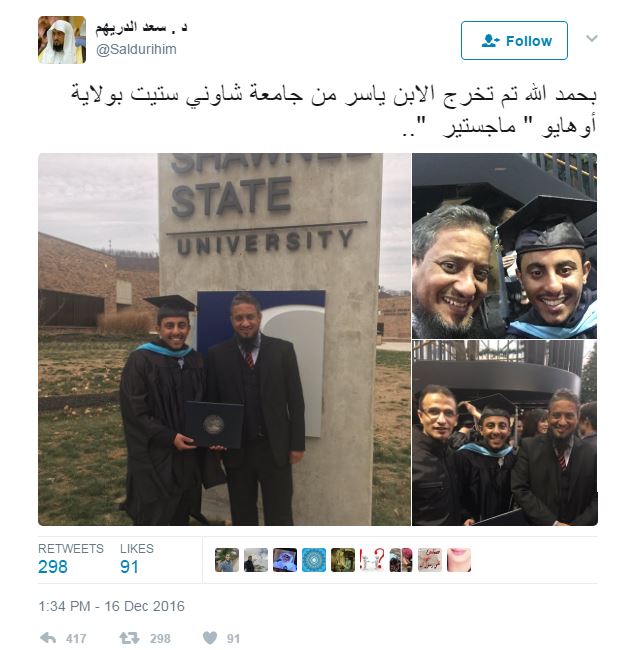 Ultimately, the report warns that the lack of vetting for Saudi nationals entering the U.S. presents a threat to U.S. security, given the trends it details.

If Saudi nationals who leave the U.S. end up joining Daesh and returning to the U.S. – a real possibility, given the near non-existent vetting and the dual citizenship of many of these individuals – Daesh’s presence in the United States would certainly increase. But with the U.S. government’s refusal to recognize the Saudi government as a major sponsor of global terror, the U.S.’ “special relationship” with Saudi Arabia may once again continue to take priority over national security.

Wikileaks’ Friday leak of nearly 20,000 Democratic National Committee (DNC) emails reveals many nefarious activities. In light of new evidence the DNC intentionally sabotaged Bernie Sanders while DNC staffers mocked him, Hillary Clinton and the Democratic Party continue to be hit with embarrassing revelations. One of the most damning findings of the leak is the fact Read More…

Yes, we are all well aware the Constitution limits the Presidency to two consecutive four-year terms of office.  Then again, if you weigh the track record of the Obama administration, the Constitution is nothing more than a challenge that he bypasses and circumvents with every given opportunity.  Small wonder that he may very well do Read More…

Is The US Intentionally Killing Russians In Syria?

After an attack on February 7 by the United States military against Syrian “pro-regime forces,” reports quickly emerged that the U.S. had killed a number of Russians embedded with the Syrian forces. While the Russian government remained silent, the U.S. soon announced that it had indeed killed “scores” of Russians in that air raid. Later, Russia confirmed Read More…