A new bombshell joint report issued by two international weapons monitoring groups Tuesday confirms that the Pentagon continues to ship record breaking amounts of weaponry into Syria and that the Department of Defense is scrubbing its own paper trail. On Tuesday the Organized Crime and Corruption Reporting Project (OCCRP) and the Balkan Investigative Reporting Network (BIRN) produced conclusive evidence that not only is the Pentagon currently involved in shipping up to $2.2 billion worth of weapons from a shady network of private dealers to allied partners in Syria – mostly old Soviet weaponry – but is actually manipulating paperwork such as end-user certificates, presumably in order to hide US involvement.

The OCCRP and BIRN published internal US defense procurement files after an extensive investigation which found that the Pentagon is running a massive weapons trafficking pipeline which originates in the Balkans and Caucuses, and ends in Syria and Iraq. The program is ostensibly part of the US train, equip, and assist campaign for the Syrian Democratic Forces (SDF, a coalition of YPG/J and Arab FSA groups operating primarily in Syria’s east). The arms transfers are massive and the program looks to continue for years. According to Foreign Policy’s (FP) coverage of the report:

The Department of Defense has budgeted $584 million specifically for this Syrian operation for the financial years 2017 and 2018, and has earmarked another $900 million of spending on Soviet-style munitions between now and 2022. The total, $2.2 billion, likely understates the flow of weapons to Syrian rebels in the coming years.

But perhaps more shocking is the following admission that Pentagon suppliers have links with known criminal networks, also from FP:

According to the report, many of the weapons suppliers — primarily in Eastern Europe but also in the former Soviet republics, including Kazakhstan, Georgia, and Ukraine — have both links to organized crime throughout Eastern Europe and spotty business records.

The sheer amount of material necessary for the Pentagon program — one ammunition factory announced it planned to hire 1,000 new employees in 2016 to help cope with the demand — has reportedly stretched suppliers to the limit, forcing the Defense Department to relax standards on the materials it’s willing to accept.

It is likely that the organized crime association is the reason why the Pentagon has sought to alter its records. In addition, the sheer volume of weaponry continuing to ship to the Syrian battlefield and other parts of the Middle East means inevitable proliferation among unsavory terror groups – a phenomenon which has already been exhaustively documented in connection with the now reportedly closed CIA program to topple the Syrian government. The associations and alliances among some of the Arab former FSA groups the DoD continues to support in the north and east remains fluid, which means US-supplied weapons will continue to pass among groups with no accountability for where they end up.

One of the authors of the OCCRP/BIRN report, Ivan Angelovski, told Foreign Policy that, “The Pentagon is removing any evidence in their procurement records that weapons are actually going to the Syrian opposition.” The report is based on internal US government memos which reveal that weapons shipment destination locations have been scrubbed from original documents. 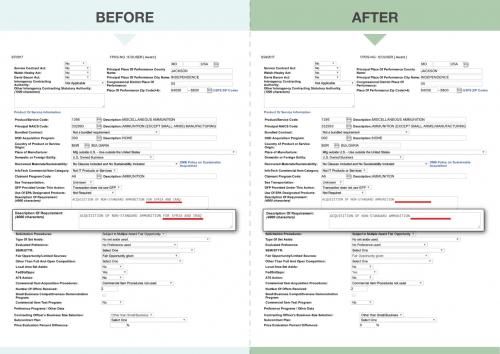 Is an EUC (End User Certificate) still an EUC if it doesn’t include an end user? 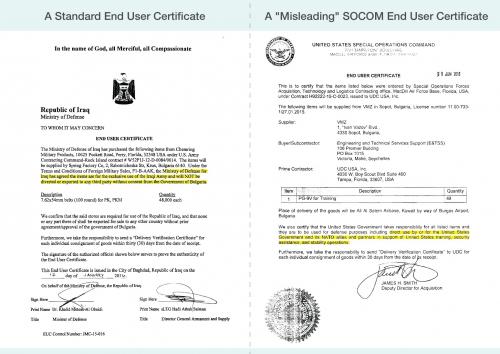 Balkan Insight, which is hosting the original investigative report: “Seven US procurement documents were whitewashed to remove reference to ‘Syria’ after reporters contacted the Pentagon to enquire about whether the exporting countries – Bulgaria, Romania, Serbia, Ukraine and Georgia – had been informed of the destination.”

The fact that Foreign Policy, which is the foremost establishment national security publication in the world, would admit that the Pentagon’s Syria weapons procurement program is tied to East European organized crime is itself hugely significant. At this point the evidence is simply so overwhelming that even establishment sources like FP – which itself has generally been pro-interventionist on Syria – can’t deny it.

FP further reports that the Pentagon program “appears to be turbocharging a shadowy world of Eastern European arms dealers.” And adds further that, “the Pentagon is reportedly removing documentary evidence about just who will ultimately be using the weapons, potentially weakening one of the bulwarks of international protocols against illicit arms dealing.” 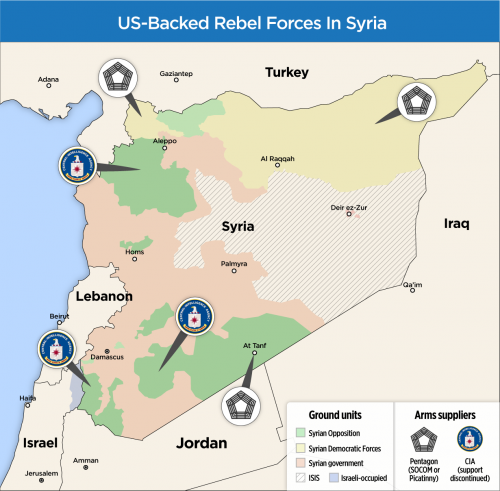 Map/Infographic produced as part of the OCCRP/BIRN report, itself confirmed by Foreign Policy magazine. Notice the map denotes that prior CIA weapons went directly to Idlib province (northwest, section in green) and the Golan border region (south). Both of these areas were and continue to be occupied by al-Qaeda (in Idlib, AQ’s Hay’at Tahrir al-Sham). In Idlib specifically, analysts have confirmed genocidal cleansing of religious minorities conducted by AQ “rebels” directly assisted by CIA weapons.

Late last month we featured the story of Bulgarian journalist Dilyana Gaytandzhieva, who was fired from her job after being interrogated by national intelligence officials for exposing the same Pentagon arms network which is the subject of the latest OCCRP/BIRN investigation. At the time, Al Jazeera was the only major international outlet which covered the story, which confirmed that Bulgarian agents interrogated Gaytandzhieva and “tried to find out her sources.” An anonymous source had leaked a large trove of internal government files connected to the arms trafficking to the East European-based Trud Newspaper journalist, which was the basis of her reporting. The newest investigation released Tuesday appears to include some of the same documents, also confirmed by Gayandzhieva.

Nothing I would write or say could explain more thoroughly the reasons and actions the U.S. Centers for Disease Control and Prevention (CDC) take regarding pharmaceuticals, vaccines and medical technologies than the fact that the CDC is listed as a “business” on the U.S. stock exchange; see the Dunn & Bradstreet report below. Source   Read More…

In a development with the shocking potential to upend the U.S. presidential election, ten Electoral College electors have requested further insight into President-Elect Donald Trump’s alleged ties to Russia to determine “whether Mr. Trump is fit to serve as President of the United States.” Led by Christine Pelosi, daughter of Democratic House leader Nancy Pelosi, Read More…

The Trump Administration was quick to recognize Juan Guaido as the rightful ruler of Venezuela, but going from that to the de facto ruler is taking Guaido a lot longer than he apparently expected. He’s planning a major May 1 march. He says it will be the “biggest march in history” and will demand that President Maduro Read More…