Since the overnight Saturday and into early Sunday joint Israeli-UN operation which successfully evacuated White Helmets members and their families from southwest Syria at the request of the US and European governments, new details and footage have emerged.

First, what we find most striking and woefully under-reported in international media is that the fact that armed groups immediately set fire to Quneitra crossing on the Syrian side of the border the morning just after the White Helmets passed through it to the Israeli side.

The post acts as the only crossing between Syrian territories and the Israeli-occupied Golan Heights, and was formerly run by the United Nations Disengagement Observer Force (UNDOF). There is over a mile in distance between the Syrian and Israeli sides of the crossing.

Middle East-based Al Masdar News reported Monday that the crossing was used by Nusra militants (also called Jabhat Fatah al-Sham/JFS, or Syrian al-Qaeda) to store weapons, ammunition and various supplies provided by Israeli Army, suggesting that its destruction by al-Qaeda and FSA fighters may have been an attempt at concealing the extent of their external state sponsorship by the Israelis.

Over the weekend while the Israeli Defense Forces (IDF) began facilitating the covert cover of darkness plan to evacuate the White Helmets, which ended up being 422 people as opposed to initial Jordanian and Israeli statements indicating 800 persons, a separate convoy of buses simultaneously prepared to transport militants to Idlib who surrendered during a fierce Syrian Army advance on the area.

The transfer to Idlib, which included a large caravan of buses, was part of a previously reported ceasefire arrangement brokered by Russian officers, according to Reuters. 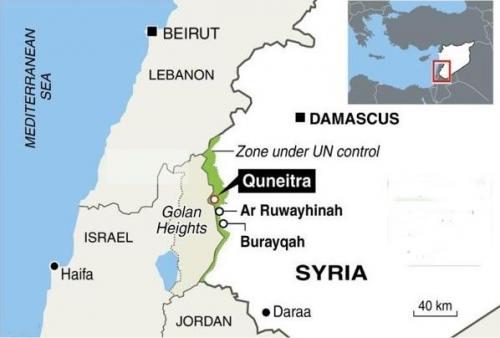 The blaze at Quneitra crossing appeared just as the militants departed and as the Syrian Army prepared to resume control of the area.

Gunmen from al Nusra front ( al Qaeda in #Syria ) burned down the only crossing between syrian and the the #Israeli syrian occupied Golan highest ( Quneitra crossing ) before leaving to idlib https://t.co/YjkYo1jVuv

Meanwhile, Israel released professionally edited footage of the nighttime transfer of White Helmets and their families into Israel via the Golan border in what the IDF called “an exceptional humanitarian gesture”.

WATCH: Members of the #WhiteHelmets and their families being evacuated by the #IDF from southern #Syria to #Jordan through #Israel @i24NEWS_EN pic.twitter.com/nVQZxNyAcO

The UK, Germany, and Canada have confirmed they will resettle the White Helmets members and their families, with German Interior Minister Horst Seehofer announcing Germany would issue residency permits to eight White Helmets, allowing them to bypass asylum applications.

The move has come under fierce criticism by Syrian and Russian leaders, as well as some journalists in the West who have long documented the group’s associations with Nusra Front, which is a designated terrorist group in the US and internationally.

Some have questioned just who it is that’s being resettled and their ties to extremist groups.

Israeli Prime Minister Benjamin Netanyahu posted a statement to Twitter following the IDF operation over the weekend to covertly evacuate the White Helmets, saying, “Several days ago President Trump contacted me, as did Canadian prime minister Trudeau and others, and requested that we assist in evacuating hundreds of White Helmets from Syria…”

The White Helmets have been caught on film multiple times bearing arms alongside known al-Qaeda terrorists and even assisting in al-Qaeda conducted field executions (such as in this extremely graphic video authenticated by journalist Ben Norton) — this as the group consistently referenced itself as a homegrown “first-responder” organization.

We’ve detailed many times before that while both the West and the group’s leadership have long claimed it’s nothing but a humanitarian non-governmental organization (NGO) devoted to rescuing Syrians in the midst of war, it is far from being a “neutral” NGO. The group has from its conception been funded by Western governments which have simultaneously sought the ouster of Syrian President Bashar al-Assad, while only operating in anti-Assad “rebel” territory, including still in al-Qaeda held Idlib.

In a formal statement issued through its official media accounts on Monday, the White Helmets organization said it has 3,750 of its members still on the ground in Syria.

Russia Threatens Military Action Against US If Washington Strikes Syria

While mystery still surrounds the statement by now-former Secretary of State Rex Tillerson who on Monday – when he already knew he was fired – said that Moscow is “clearly” behind the poisoning of Russian double-agent Skripal in the UK and that the Russian action would “trigger a response,” and whether this was a tacit defiance of Trump Read More…

Axis of Evil: US Cycle Of Regime Change In North Korea, Libya & Beyond

(RT) Secretary of State Rex Tillerson spoke harshly of North Korea and Iran this week, drawing on a dark legacy of US vilification of so-called “backlash states” that resist the pressure to give in to global free markets and US cultural hegemony. RT America’s Anya Parampil has the details on what the US has long Read More…

A since-deleted analysis posted the agency’s website shows it is relying on unpublished reports from groups linked to biochem industry The U.S. Environmental Protection Agency (EPA) used industry-funded research to conclude that the herbicide chemical glyphosate is not likely to cause cancer in humans—contradicting findings by the World Health Organization (WHO)—according to an analysis the Read More…