Even in this time of overt propaganda and general disregard for individual rights, especially when it suits the empire, we all must take comfort in the fact that not everyone is lost. That is indeed the image that most have when considering either the media, or any government body, that anyone involved has, to one degree or another, “sold their soul to the devil” to put it colloquially. But as true as that sentiment may be in most cases, there are the rare few who dare to challenge the status quo.

One such champion was Ben Swann. Now I say was, because up until a certain point, Swann was hitting on some very controversial and extremely important topics that almost no one in mainstream media was addressing. For this, he gained quite a bit of name recognition among the independent media community. That was until, Swann decided to discuss Pizzagate. His report was journalistic in nature, and simply addressed the facts of the case, but that was too much for those pulling the strings. He was unceremoniously, and instantaneously removed from the air, temporarily, and removed from his show indefinitely, because he failed to adhere to the modern-day golden rule of mainstream journalism: know what you are not allowed to talk about.

His documentary on how the US created, funded and trained ISIS was cancelled, and all his social media accounts were deleted, at that time. Since then, he has reemerged as a milk-toast no-name anchor on his home channel’s nightly news show; not a mention of anything outside the normal State-approved nightly rundown. 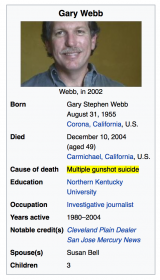 All too often these brave trailblazers burn too bright for the ruling class, and end up committing suicide by shooting themselves in the head … twice, or stabbing themselves … in the back. There are many cases, especially when one dives into the infamous “Clinton Body Count,” with the same such circumstances, where the victims were found with their hands tied, and still it was ruled a suicide. The case of Seth Rich is a similar such story that most are aware of due to the over the top counter-discussion of the case by mainstream media. This is exactly what was seen in the investigation that became known as Pizzagate. The claim is that these stories are so ridiculous, so absurdly false, that it does not deserve your attention. Yet, they then go on to devote all of their collective attention to it. This in and of itself should speak volumes.

Seth Rich was killed on the street, in what those attempting to cover up his story falsely ruled a “botched robbery,” yet that was clearly not the case. Upon further investigation, it appears that Seth Rich was the WikiLeaks source who leaked the DNC emails. This then leads a genuine investigator to ask the obvious question: cui bono? Who benefits? If Seth was indeed the source, as this video, and the videos below will demonstrate, and with the mountains of damning info that he could have potentially released on the DNC, it was clearly in the DNC’s and the Clinton’s best interest to silence the WikiLeaks source.

Yet, despite any number of suspicious actions taken by the DNC and the DC police, those involved in the “investigation” continue to ignore what any average individual (who takes the time to understand more than just the half-truths pumped out by MSM) can plainly see. One local news network apparently felt the same way, and took upon themselves to dive into the investigation and ask the tough questions. One America News Network (OAN) simply rehashed the facts of the case, yet anyone who watched the segment could see just how much was being ignored by the DC police.

Then, the video vanished.

The video disappeared from every prominent location online, showing yet again just how big of a deal this case truly is and how it could potentially bring down the proverbial house of cards. This is precisely why those involved are pulling out all the stops in order to keep this information from becoming public knowledge. There are verified reports of police being told to stand down on the case, of DNC representatives asking why the family’s hired investigator is “snooping around” in the unsolved murder case of a colleague. To anyone who is not looking through the modern-day partisan lens, that seems to hinder any rational or critical thinking, this case is clearly not being investigated, but rather stifled, manipulated and controlled. Lucky for our readers, TLAV diligently downloads and saves any content that seems important, as it is quite obvious that damning videos today just have a way of “disappearing.”

After you watch this segment, ask yourself two questions:

Why, with this amount of obvious data pointing toward both Seth being the WikiLeaks source, and that he was assassinated for it, are the DC police not doing their job?

If this case is a “wild conspiracy theory” that has no basis in reality, why was the wholly factual OAN report abruptly removed as if it never existed?

This video will likely be taken down eventually as well, but the video below it plays the segment at the end.

Update: Just as we expected, the OAN report simply vanished from the TLAV YouTube channel, yet still oddly plays on this article page despite being grayed out; but for download purposes, here is the BitChute link:

Joining me today is Dr. Peter McCullough, here to discuss the COVID-19 vaccine push and how this agenda has overshadowed, whether by ignorance or dishonesty, the viable and efficacious alternative treatments that many experts have been trying to call attention to since the beginning of the COVID crisis.  (https://www.rokfin.com/TLAVagabond) (https://odysee.com/@TLAVagabond:5) (https://www.bitchute.com/channel/24yVcta8zEjY/) Click HERE For Super Read More…

International Lawyers: Strike Against Syria Would Be Illegal