Ukraine and Syria have pipelines and crop fields, of which the group of 49 largest financial holding companies want control. The major shareholders instruct their chairmen to make more money. Since western society follow the instructions, they comply even if toppling a government costs lives.

If the West had allowed or encouraged Russia to take control of Syria, Ukraine, Iraq, Afghanistan and Libya, there would be nearly zero migration and fewer deaths. The war mongering going on now is 100% political, so the people vote for the establishment (group of 49) out of fear. It is about money, and the group of 49 hold 10 times more control than expected based on wealth. As outlined in an earlier article, the gross lack of competition in every industry, and the knowledge of an “economic super-entity,” should make every American sick to their stomach and furious with outrage.

What we can do? Solutions:

The group of 49 are acting like a predatory mob, mafia-like, and Americans need to call them out on it. The antitrust agencies need to sit down and ask each board member if they understand the Sherman Antitrust Act, then ask if they are in conflict of interest. Insist those leaders to sign a document annually stating they are not, or don’t even appear to be in a conflict of interest under threat of imprisonment.

In a previous article in regards to who controls what, the top few chairman in the group of 49 were named. Now it’s time to elect a presidential leadership that will hold them to new ethical standards. The following simple adjustment, to the corporation act would result in a swift corrective change. A number of the largest publicly traded companies or holding companies should have 20% shares held by the community and 20% shares held by employees. At the very least this apply to the companies that fail during the next down turn. No more bail-outs or bail-ins, we can call it a ‘redistribution of wealth’ because they brought us here and its their turn to endure consequences. This would eventually reverse any systemic risk for the population. No industry leader that is publicly traded should be able to dominate more than 5% of the global market.

Below are some of the ‘not’ so highly paid executives in our economic system: 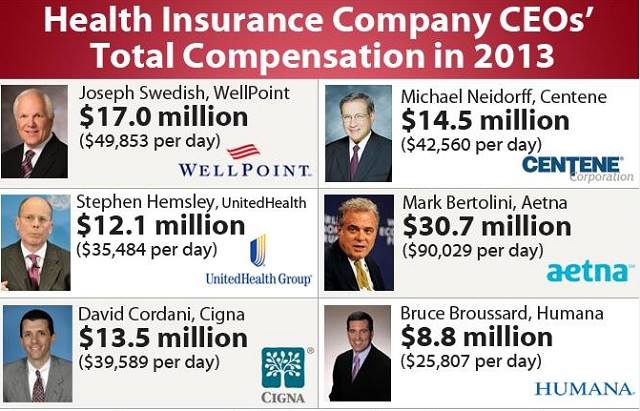 Transparency needs to be everywhere. New computational trust can help with that(I have been working in finance in some capacity for over 35 years and when I looked up the Clinton Foundation to see their annual report it was not transparent enough). When Bernard Sansaricq, Former President of the Senate, Republic of Haiti calls out the Clinton Foundation for fraud we should be able to review the books in detail to discount those allegations or prosecute if necessary. Transparent blockchain auditing needs to be implemented.

Antitrust agencies must be forced to drill deeper down on the corporate holdings data set(called Orbis) used in a Swiss Federal Institute study and see exactly who owns and controls what. Surely this will expose the shocking few which hold enormous sickening amount of wealth. Much more wealth than the group of 49 chairman have; that is where direction is coming from in this ‘economic super-entity’ and it is their turn to be held accountable when the system fails.

The rule of law also needs to be enforced with regards to generally accepted accounting principles. Some banks are allowed to break these rules undermining global trade and competition. This new rule-breaking shows that our biggest banks are now kiting their money between each other to appear solvent. This is why governments don’t trust each other. Putting Glass–Steagall legislation back into effect as originally drafted, and abolishing Mark to Market accounting would be two great steps in the right direction. PhD Jeffrey Skilling who spearheaded Mark to Market into law, is in jail and sentenced for 24 years for abusing Mark to Market accounting while CEO of Enron.

Traders and most financial advisers are not bookkeepers and don’t understand the underlining difference between fundamental accounting and technical trading. That is, fundamental trading is based on facts like revenue; less expenses equals profit. Technical is based on charts of past movements in the market based on multiple things. Technical trading is guessing on the future based on what happened in the past. All pensioners should have to sign a disclosure document saying they agree to have their pension plan money traded by estimating future trends. In the past, predicting the future was called magic and at one time people would be burned at the stake for just that. The majority of all trading now is done through algorithms that trade on technicals. It has been proven that high-frequency traders can front run trades with good algorithms and speed–while some say speed is not front running. When we see banks being fined all over the place for fraud and felonies I call this a rigged system. The trader will say only those who lose money say it’s rigged.

The bad news as outlined in our previous October 15 2016 article:

Global growth has crashed to levels not seen since 1955. Home ownership rates are at 50-year lows in the USA and the job participation rate is also at a 38-year lows. So don’t listen to the headlined unemployment rate as that is mostly new part-time jobs. The Dry Bulk Index being at multiple year lows and a recent report from the WTO said they are lowing their forecast on global growth by about a third to its lowest rate since 2009.

The smart money has already left owning the European bank shares and most of those shares have dropped 40-50% over the last year. The stock market is at a record 25:1 P/E (price to earning ratio) while corporate profits are down at least 3 quarters in a row the longest and broadest slide in earnings since the financial crisis. During good times and before this near zero interest rate policy the average P/E was closer to 15:1.

The US, Japan and EU have printed over $5-10 trillion dollars in the last decade and the European Central Bank (ECB) Mario Draghi says we will do “whatever it takes,” and so ECB has been printing monthly for the last year and a half, along with Japan printing full blast monthly for the last three years. The Japanese Government is currently buying 60% of the Exchange Traded Funds (ETF) on their stock exchange. These are not free market moves, these are moves of desperation.

To make things worse the Plunge Protection Team and Exchange Stabilization Fund should not exist in a true free market. We do not have a free market so start protecting yourself from the unsustainable economic system you are in.

The ‘group of 49‘ are at any time ready to fleece the people, but they just don’t want to be blamed. I also think they are trying to poke the bear as much as possible so they can blame someone else for the market crash – war which seems to work as a great distraction. Big players are sitting on tons of cash. Warren Buffett has $73 billion.

What brought us here:

To quote from a study by Oxfam February 2016,

“CORPORATE DOMINATION – A lack of competition presents opportunities for companies to set prices that enable them to extract returns over and above real value and productivity.”

The worlds largest 49 holding companies are financial companies and their few leaders control markets. So one may see different logos such like Shell, Esso, BP or Coke verses Pepsi but really these leaders set the company’s tone and direction. This is a near monopoly with different logos floating around. A study done by 3 PhDs from the Swiss Federal Institute of Technology clearly concludes that,

“globally, top company holders are at least in the position to exert considerable control, either formally (e.g., voting in shareholder and board meetings) or via informal negotiations.”

The following are revelations from that study done by PhD’s; Dr. Stefania Vitali, Dr. James B. Glattfelder, and Dr. Stefano Battiston all from the Swiss Federal Institute of Technology in Zurich:

This 36 page intensely detailed study of the data set shows 147 companies own 40% of the shares of 43,060 transnational companies.

“relationships between 43,000 transnational corporations has identified a relatively small group of companies, mainly banks, with disproportionate power over the global economy”

This is not to be taken lightly, the 36 page study is the largest most comprehensive study of its kind in history.

The existence of an “economic super-entity” as the study authors call it has never been documented before.

For more thorough and excellent ideas on how to fix the US economy read the book written by David Stockman, the former director of the Office of Management and Budget under President Reagan, called Trumped

We are ‘powerful individuals’ and we must do our part, I will write on this until my fingers bleed. We can decentralize the corporate world and I need your help. Please note, I am not a financial advisor and suggest you seek one for all your needs but, they are paid for by corporations and live off of your fees, thereby in a conflict of interest. The first thing you could do is shop local if you can and or avoid all national companies. Next you could take your money out of the bank and put it in a lock box or my favorite, buy physical silver coins. The banks are stealing your money with fees and fraud and are at risk. Banks leverage your money and put everyone at systemic risk by a conservative 10 times. For every $1,000 dollars you take out you hit that bank by $10,000! Hit ’em hard and take these felons down. Doing this would also reduce systemic risk for everyone else.

Mattis Wants To Make US Military Even More Lethal, Needs Another $50 Billion

Speaking to Congressional Republicans during a visit to Greenbrier resort on Thursday, Defense Secretary James Mattis announced that he believes the US military needs to be made “more lethal,” and pushing for yet more money. After a massive military spending increase last year, Mattis says he wants another $50 billion tacked on for next year. He mocked Read More…

The New Travel Ban You Didn’t Hear About Is Against U.S. Citizens

As emotions intensify over Trump’s recent immigration ban, the State Department and IRS have quietly used it as a smokescreen to roll out a new policy that targets U.S. citizens for unpaid taxes. The passports of these individuals can now be revoked and their citizenship status undermined at the behest of one of the government’s Read More…

The Trump Administration Is Attempting To Block Testimony On CIA Torture

President Trump has invoked state secrets privilege in an effort to prevent the two psychologists who created the CIA’s torture program from testifying in court. The lawsuit against the two architects of the Central Intelligence Agency’s torture program has dragged on for nearly two years, with the CIA attempting to limit or completely block attempts to hold the Read More…