Gallup first began asking if Americans trusted the mainstream media in 1972. America’s trust and confidence in mainstream media stood at its highest level back in 1976 at 72%. Of course, that was due to the investigative journalism regarding Vietnam, and naturally Woodward and Berstein, with the Watergate scandal.

Following that period, the media began to attack the right with Reagan. By the late 1990s, the Americans’ trust in the media fell steadily into the low to mid 50% level.

Following 2005, the trust in mainstream media dropped into the mid 40% range. It has consistently been below a majority level ever since the 2007 economic decline. However, after the 2016 election and the extreme bias for Hillary, where virtually 99% of mainstream media deliberately tried to manipulate the people to vote for Hillary, the trust factor has collapsed to 32%. When they polled just conservative Republicans, it was 14%. So the 32% level is the average American. 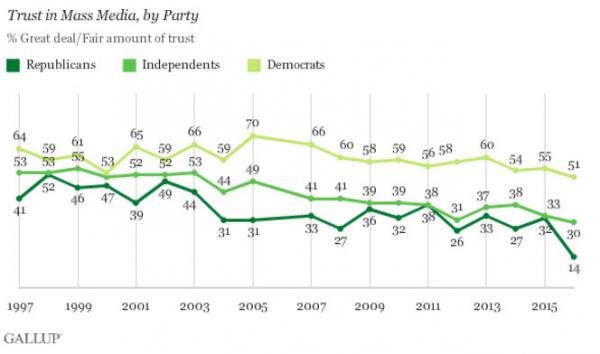 Our models on the confidence in American mainstream media using the Gallup Poll data projects a sharp decline into 2019/2020, which is the bottom of the current 8.6-year Economic Confidence Model. This will be 43 years from high. Note that 2007 was 31 years from that peak. It was 2007 and the collapse in the economy that has marked the collapse in public confidence in government and the media. 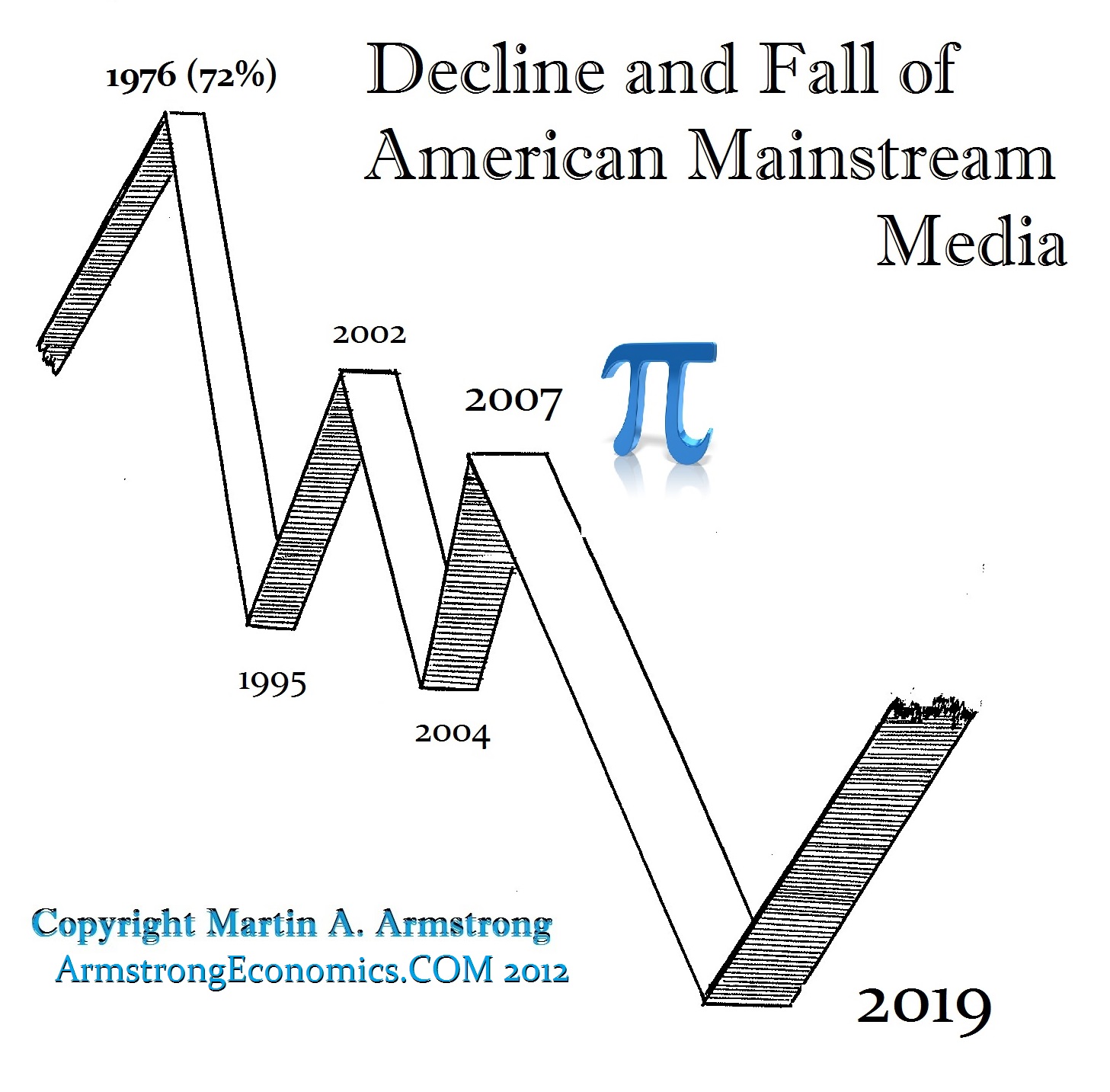 We should expect that the media will viciously attack Donald Trump in a futile effort to cling to some level of importance and to desperately try to demonstrate that they were not wrong with 99% of the media endorsing Hillary. But the media willingly conspired to make Hillary president. They will now try to vindicate themselves by trashing Trump at every possible chance. They will now fuel the civil divide and help lay the foundation for the collapse of the United States itself by turning left against right. Even the New York Post wrote that what they were witnessing was the end of journalism. They will do everything to try to change Congress in 2018. It appears that will be their last stand. The younger generation does not buy newspapers and magazines. Their end is near.

Trump summoned the mainstream TV media to Trump Tower for a meeting. Whether he can persuade them to stop the supporting of civil unrest remains to be seen. Lester Holt, Charlie Rose, George Stephanopoulos and Wolf Blitzer all headed to this private meeting. All have demonstrated outrageous bias and have disgraced the very purpose of a free press as they all tried to influence the people rather than report the news. Even Saturday Night Live made fun of how biased mainstream media has been:

Submitted by Martin Armstrong via ArmstrongEconomics.com

The Saudi-led coalition, unable to secure control of the strategic port city of Hodeida, has recently flooded the cities and towns surrounding Hodeida with foreign and indigenous mercenaries, hoping to bring the port city to its knees by taking control of the surrounding region. Backil al-Shimi is one of the thousands of Yemenis from the Read More…

Perhaps in preparation for upcoming events on the Korean Peninsula, CNN reports the US military has dropped an enormous bomb in Afghanistan, according to four US military officials with direct knowledge of the mission. The GBU-43/B Massive Ordnance Air Blast Bomb, nicknamed MOAB, was dropped at 7 p.m. local time Thursday, the sources said. The Read More…

(FAIR) — In its reporting on a dubious lawsuit alleging Iranian meta-involvement in 9/11, the New York Times badly misunderstood the case and maintained for more than three years, in the paper of record, that the government of Iran “sponsored” the September 11, 2001, attacks. The belated correction, issued late Wednesday night on two widely spaced articles on the Read More…