The Jewish State is approaching a position once the preserve of South Africa. It is vulnerable, despite the support of Western ruling elites, to grassroots boycott.

The map below shows the spread across the USA of laws against support for the Boycott, Divest and Sanctions (BDS) Movement. It was compiled by Palestine Legal, an organization dedicated to protecting the civil rights of Americans who speak out for Palestinian freedom. 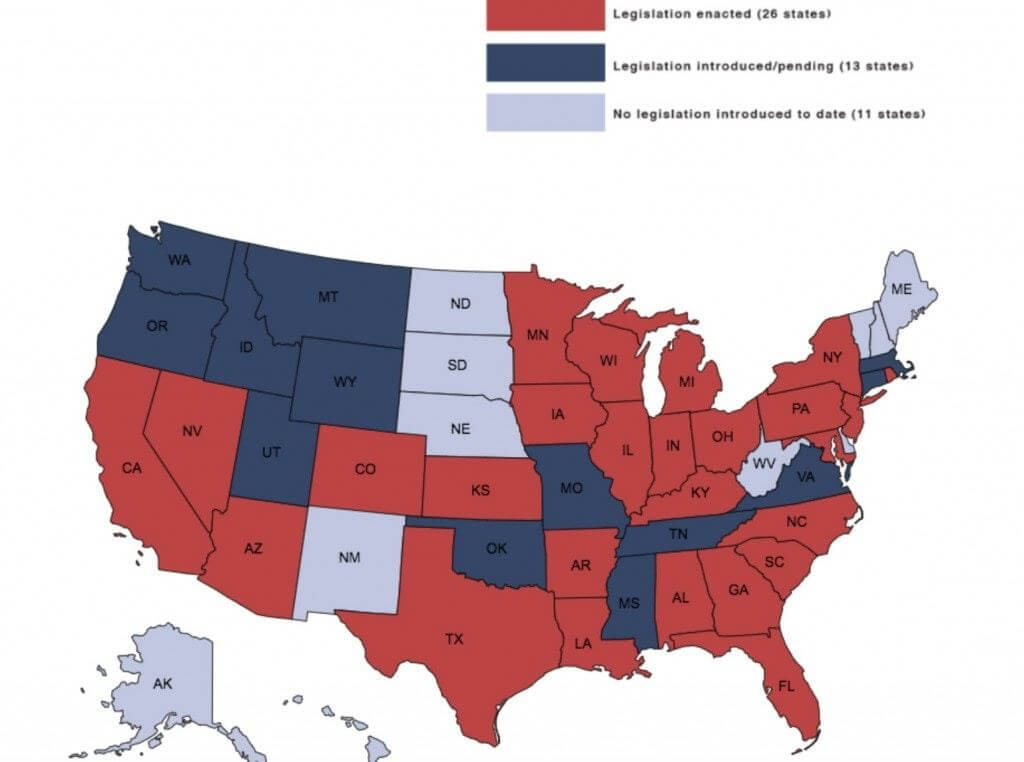 One state with anti-BDS legislation on its books is Texas. Says The Intercept:

The bill’s language is so sweeping that some victims of Hurricane Harvey, which devastated Southwest Texas in late 2017, were told they could only receive state disaster relief if they first signed a pledge never to boycott Israel. That demand was deeply confusing to those hurricane victims in desperate need of help but who could not understand what their views of Israel and Palestine had to do with their ability to receive assistance from their state government.

The evangelical author of the Israel bill, Republican Texas state Rep. Phil King, said at the time that its application to hurricane relief was a “misunderstanding,” but nonetheless emphasized that the bill’s purpose was indeed to ensure that no public funds ever go to anyone who supports a boycott of Israel.

Here’s what Greg Abbott, Governor of Texas, had to say as he signed King’s bill into law on May 2, 2017:

Now meet Bahia Amawi, a speech therapist in the lone star state. Having lost her job for refusing to sign a pledge not to boycott Israel, she’s suing the state of Texas in a bid to repeal the law which compelled an Austin school district to fire her for so refusing.

Says the Times of Israel:

Amawi worked with the local Arabic-speaking community at the Pflugerville Independent School District since 2009, on a contract basis. She told the news site that the district renewed her contract each year without incident, but when she received the documents for the 2018-19 school year in August, Amawi said it included a new clause requiring that she “not boycott Israel during the term of the contract,” and refrain from any action “that is intended to penalize, inflict economic harm on, or limit commercial relations with Israel, or with a person or entity doing business in Israel, or in an Israel-controlled territory.”

Washington Post has Pflugerville District, which alongside State Attorney General Ken Paxton is in the firing line of Amawi’s lawsuit, saying:

This language is required by the State of Texas for all school districts in Texas, along with other governmental entities. Unfortunately … all Texas school districts are at the mercy of the state and the regulations printed into law, and in situations such as this, we are forced to spend time on state political issues and not on our core mission — educating students.”

Nor is Bahia Amawi the only one suffering here. The Intercept tells us that:

Because Amawi, to her knowledge, is the only certified Arabic-speaking child’s speech pathologist in the district, it is quite possible that the refusal to renew her contract will leave dozens of young children with speech pathologies without any competent expert to evaluate their conditions and treatment needs.

The Intercept goes on to quote Amawi directly:

If I [signed the pledge] I would not only be betraying Palestinians suffering under an occupation that I believe is unjust and thus become complicit in their repression, but I’d also be betraying my fellow Americans by enabling violations of our constitutional rights to free speech and to protest peacefully.

… the point of boycotting any products that support Israel is to put pressure on Israeli government to change its treatment, the inhumane treatment of the Palestinian people”

Three comments. One is that though the hard left was in the main always opposed to the Israeli State, or at any rate its policies on the Palestinians, the liberal left tended, mindful of recent European history, not only to support it but give it a blank cheque on whatever it deemed had to be done. That began to change after the Shatila and Sabra camp massacres in Lebanon, 1982. Since then its acts have seen the weight of liberal and center-left opinion steadily tilting away from Israel, to the point where the Jewish State is approaching a position once the preserve of South Africa. Israel is vulnerable, despite the support of Western ruling elites, to grassroots boycott. Recognition that, for all its hasbara, Israel is losing the propaganda war is the context in which anti-BDS legislation within its ally and primary underwriter should be seen.

Another is that this shift is analogous to that much wider change which has seen mainstream Western media slowly losing their grip on our hearts and minds. Thanks to the rise of the internet – with its triple whammy of vastly extended choice of news sources, many-to-many social media and, related but distinct, a threat to revenues for corporate media’s two-hundred-year-old business model – a ruling class monopoly on opinion formation and manufactured consent is weakened. This poses problems for a status quo loaded massively in favor of the few against the many. (All the more so when, as now, war drums are beating.) Like those anti-BDS laws, the war on fake news is best understood as early skirmish within conflicts greater, more fraught and ultimately more far-reaching in significance.

But one of capitalism’s many dialectics is that for all its terrifying instability, it is extraordinarily adaptive in its Borg-like ability to accommodate all – or at any rate most – opposition. Not to mention its own crimes. Which brings me back to the issue at hand. Given more confidence in the survival of our species – and liberal democracy – I’d offer generous odds on Bahia Amawi being granted, half a century from now, Rosa Parks status.

US Threatens New Military Action Against Syria Over Eastern Ghouta

US Ambassador to the United Nations Nikki Haley has demanded that the UN Security Council immediately declare a 30-day ceasefire across Eastern Ghouta and the rest of metro Damascus, and is threatening to attack Syria if this doesn’t happen. Eastern Ghouta is the last rebel-held area around Damascus, but over the past several weeks, the Read More…

Joining me today is Whitney Webb to discuss some of her recent research into an alarming connection Starbucks has to the COVID-19 vaccine agenda, as well as some suspicions about the GameStop fiasco, as well as the WEF and its “Cyber Pandemic” simulations.   (https://www.rokfin.com/TLAVagabond) (https://odysee.com/@TLAVagabond:5) (https://www.bitchute.com/channel/24yVcta8zEjY/) Video Source Links: Starbucks https://www.govtech.com/health/Washington-Draws-on-Private-Sector-Experts-for-Vaccine-Rollout.html https://www.nbcnews.com/news/us-news/washington-state-taps-starbucks-help-covid-vaccine-rollout-n1254607 https://seattle.eater.com/2021/1/19/22239198/starbucks-helping-washington-covid-vaccine-rollout https://medium.com/wagovernor/inslee-announces-state-plan-for-widespread-vaccine-distribution-and-administration-62196dcf5ecf https://stories.starbucks.com/stories/2021/offering-to-serve-starbucks-joins-effort-to-help-speed-covid-19-vaccination-delivery/ Read More…

90,000 Gallon Oil Spill in Gulf of Mexico Just Business As Usual for Shell

Royal Dutch Shell’s offshore drilling operations were pouring oil into the Gulf of Mexico on Thursday, ultimately releasing nearly 90,000 gallons of oil into the water off the Louisiana coast. “We have allowed the [Gulf] to be perpetually treated as a sacrifice zone—a place where we tolerate pollution and disasters to continue our dependence on Read More…