Heinz Alfred “Henry” Kissinger may not be the devil himself, but he sure acts like his emissary. Seemingly everywhere there is death, destruction, carnage, criminality and cover up, you can bet old man Kissinger won’t be far behind.

It would be like some game that you could whip out at a party if it wasn’t all so perverse: How many degrees of separation are there between any major tragedy of the past half century and Henry Kissinger?

Which is why the Nobel Institute’s decision to honor Kissinger (along with the equally horrendous globalist conspirator Zbigniew Brzezinski) at the first ever Nobel Peace Prize Forum in Oslo this Sunday is so ludicrous that one has to imagine that they’re merely trolling the public. That feeling is confirmed when we discover that the topic that these two distinguished guests will addressing at that forum is (drum roll please): “The United States and World Peace After The Presidential Election.” 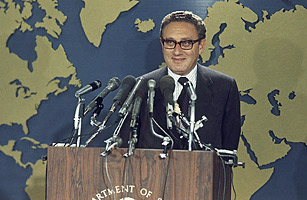 Yes, you read that right. The Nobel Institute has invited an unindicted war criminal and an arch-schemer for American imperial domination to talk about the United States and world peace. This would seem like an absolutely inexplicable outrage on behalf of an organization that is supposedly dedicated to the furthering of the peace cause, except (as my dedicated listeners are already well aware) the (Ig)Nobel Peace Prize has (dis)honored many a war criminal in the past, Kissinger included.

Thankfully, the outrage has not gone entirely unnoticed. Nobel Peace Prize Watch (yes, that’s a thing) has issued a formal request to the Norwegian Director of Public Prosecutions to arrest Kissinger while he’s in Oslo. The letter, which should be read for its ample documentary evidence alone, begins by noting:

“The discrepancy between the world of Kissinger and the peace by global disarmament and cooperation, the demilitarized ‘fraternity of nations’ ideas, the Nobel committee was supposed to promote, is so glaring that it defies comment. The same applies to the University of Oslo. We wish to draw your attention to Kissinger ́s comprehensive, unparalleled record of serious international crimes and the need for prosecutorial action.”

They then lay out a case for the arrest of Kissinger that includes:

-His participation in Operation Condor, the coordinated kidnapping, torture, murder and “disappearing” of political dissidents by the death squads of Chile, Argentina, Brazil, Uruguay, Paraguay and Bolivia.

-His participation in multiple atrocities during the Vietnam War, including his insistence on dropping a 15,000 pound BLU-82 bomb — the largest conventional explosive weapon in the U.S. arsenal at the time — on Koh Tang island.

-His role in coordinating the patently illegal bombing of Laos and Cambodia during the Vietnam War.

-His role in giving the US’ blessing to the brutal and illegal invasion and occupation of East Timor by East Timor.

It’s a sick testament to his reign of terror that such a list only partly encapsulates Kissinger’s true bloodthirstiness. To capture the true depths of depravity, you might want to revisit Episode 106 of my podcast or read about “Henry Kissinger’s 1974 Plan for Food Control Genocide,” in which Herr Kissinger ruminates on the age old question: “Would food be considered an instrument of national power? … Is the U.S. prepared to accept food rationing to help people who can’t/won’t control their population growth?”

Needless to say, the case for the arrest and trial of Henry Kissinger for war crimes and crimes against humanity has been made many times over by journalists, researchers and activists over the years.

Some will be tempted to give in to their cynicism on this matter. “Oh,” they’ll say, “what does it matter? The criminals run the courts anyway, he’ll never face true justice for his crimes.” Indeed, it isn’t hard to point out any number of times when equally reprehensible criminals have evaded justice despite the attempts of various organizations to have them arrested:

But in fact, Henry Kissinger is notable among the unindicted war criminal jetset in having not one, not two, not three, but four separate legal systems with outstanding requests to answer for his participation in various atrocities. Kissinger’s arch nemesis Christopher Hitchens explained in 2001:

“It was, take it for all in all, a near-faultless headline: HENRY KISSINGER RATTRAPÉ AU RITZ, À PARIS, PAR LES FANTÔMES DU PLAN CONDOR. I especially liked the accidental synonymy of the verb rattraper. What a rat. And such a trap. It was in this fashion that the front page of the Paris daily Le Monde informed its readers that on Memorial Day the gendarmes had gone round to the Ritz Hotel–flagship of Mohamed Al Fayed’s fleet of properties–with a summons from Judge Roger Le Loire inviting the famous rodent to attend at the Palace of Justice the following day. In what must have been one of the most unpleasant moments of his career, noted Le Monde, the hotel manager had to translate the summons to his distinguished guest. Kissinger left the hotel, surrounded by bodyguards, and later announced that he had no desire to answer questions about Operation Condor. He then left town.[…]

“On the Friday immediately preceding Memorial Day, another magistrate in a democratic country made an identical request. In order to discover what happened to so many people during the years of Condor terror, said Argentine Judge Rodolfo Canicoba Corral, it would be necessary to secure a deposition from Kissinger. And on June 4 the Chilean judge Juan Guzmán Tapia asked US authorities to question Kissinger about the disappearance of the American citizen Charles Horman, murdered by Pinochet’s agents in 1973 and subject of the Costa-Gavras movie Missing (as well as an occasional Nation correspondent). So that, in effect, we have a situation in which the Bush regime is sheltering a man who is wanted for questioning on two continents.”

So while it may be vanishingly unlikely that Norwegian authorities heed the advice of The Nobel Peace Prize Watch and detain Heinz Kissinger in Oslo this weekend, one can always hope that some turbulent conditions might force an emergency landing in France. Judge Le Loire’s summons is still outstanding.

For those who are interested in such things and who are reading this column in time, you can signal your support for Kissinger’s arrest by signing RootsAction’s petition on the matter.

The US is attempting to sell to the public the next phase of its continued occupation and military operations across the Middle East. Predicated on claims of “rebuilding” Iraq and “fighting terrorists” in Syria, it is in actuality a plan to perpetuate for as long as possible the upheaval currently consuming the region in hopes Read More…

A graphic cell phone video showing two officers execute a man at point blank range last week prompted immediate outrage in a Baton Rouge community. While the first video was enough to enrage the community, another video, released the Wednesday after the shooting, was absolutely horrifying. Now, according to a recent lawsuit, the surveillance video may be even Read More…