Attorney General Jeff Sessions has instructed DOJ prosecutors to begin asking FBI agents for explanations regarding evidence pertaining to a dormant criminal investigation into the controversial Uranium One deal linked to Bill and Hillary Clinton, according to NBC.

The order comes as part of a promise made last month by Sessions to examine whether or not a special counsel was warranted in the deal which saw 20% of American Uranium sold to a Russian state-owned energy company in a 2010 transaction allowed by the Obama administration. Prior to the deal, individuals connected with Uranium One deal had donated over $140 million to the Clinton Foundation. Moreover, Bill Clinton gave a $500,000 speech to a Russian bank which issued a favorable rating on Uranium One stock. Clinton and Putin met the same day of the speech at the Russian leader’s private homestead.

A report by the New York Times and the book Clinton Cash by investigative journalist Peter Schweizer in 2015 are said to have convinced the FBI in large part to launch their investigation into the Clinton Foundation over several claims of pay-for-play before and during Hillary Clinton’s role as Secretary of State, including the Uranium One deal and several international arms sales.

As reported in International Business Times:

The Clinton-led State Department also authorized $151 billion of separate Pentagon-brokered deals for 16 of the countries that donated to the Clinton Foundation, resulting in a 143 percent increase in completed sales to those nations over the same time frame during the Bush administration.

As part of the Uranium One approval process, nine agencies which made up the Committee on Foreign Investment in the United States (CFIUS) had to sign off on the deal. The committee has been considered by some to be a “joke.”

“The committee almost never met, and when it deliberated it was usually at a fairly low bureaucratic level,” Richard Perle said. Perle, who has worked for the Reagan, Clinton and both Bush administrations added, “I think it’s a bit of a joke.” –CBS

As discovered in early November by Twitter researcher Katica while looking at FOIA-requested documents, the FBI made several Preservation and Records requests to various agencies involved in the approval of the Uranium One deal on August 28th, 2015, as published by The Conservative Treehouse. Katica found the requests buried in an FBI file released via the Freedom of Information Act (FOIA). 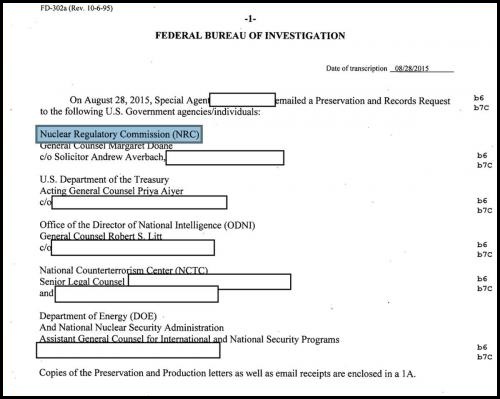 This is big: the agencies which received the request included the Nuclear Regulatory Commission, the U.S. Dept. of Treasury, the Office of Director of National Intelligence (ODNI James Clapper), The National Counter Terrorism Center, and the U.S. Department of Energy (DOE).

As The Conservative Treehouse noted in November:

It would be intellectually dishonest not to see the very likely attachment of the special agent’s action.  That is to say an FBI probe originating as an outcome of information retrieved in parallel to the timing of the “criminal probe” of Secretary of State Hillary Clinton’s email use.

If you consider the larger Clinton timeline; along with the FBI special agent requests from identified participants; and overlay the Nuclear Regulatory Commission as the leading entity surrounding the probe elements; and the fact that the CFIUS participants were the recipients of the retention requests;  well, it’s just too coincidental to think this is unrelated to the Uranium One deal and the more alarming implications.

An October report in The Hill revealed that as early as 2009, the FBI – led by Robert Mueller at the time, had a mole in the Russian uranium industry, and that the agency had evidence that “Russian nuclear officials had routed millions of dollars to the U.S. designed to benefit former President Bill Clinton’s charitable foundation during the time Secretary of State Hillary Clinton served on a government body that provided a favorable decision to Moscow” – a deal which would grant the Kremlin control over 20 percent of America’s uranium supply.

Tying it together – previous reports of Federal investigations into the Clinton Foundation:

So – while the FBI investigation into Hillary Clinton was sold as a simple matter of mishandling of classified material, we now have proof that the FBI set their sights on the Uranium One scandal weeks after they began looking into Hillary Clinton’s emails, and that five FBI field offices and the IRS have been investigating the Clinton Foundation on accusations of pay-to-play and other criminal acts.

As US and Kurdish forces carried out offensives against ISIS in the area, US warplanes carried out airstrikes against the town of Khoeberah, in the mostly Kurdish Hasakeh Province of northeast Syria, killing 18 civilians. Details are still emerging on the incident, which the Syrian government has confirmed. The majority of the slain civilians are, Read More…

Man Sues After Being Wrongfully Arrested And Injected With Psychotropic Drugs

A Pennsylvania man is suing a medical center and the police after he was wrongfully arrested and forced to take psychotropic drugs. He claims he told police and medical personnel they were mistaking him for somebody else. “The experience that I went through, this should never happen to anybody. It’s very simple to check ID,” Read More…