In a trite refrain straight out of the standard Washington regime change playbook, the United States has lodged a formal complaint alleging Iran is developing nerve agents “for offensive purposes.”

Like Syria before (and Russia), first comes the “outraged!” human rights violations rhetoric, then come crippling sanctions and international “pariah status,” and for the final push comes unfounded chemical attack claims, a charge now being formally prepped and set in motion against Tehran by the West.

After the AP first revealed a week ago that the U.S. is set to accuse Iran of violating international bans on chemical weapons, an American diplomat has told the global chemical weapons agency in The Hague that Tehran has not declared all of its chemical weapons capabilities.

On Thursday Ambassador Kenneth Ward told a meeting of the Organisation for the Prohibition of Chemical Weapons (OPCW) that Iran was in violation of an international non-proliferation convention.

“The United States has had longstanding concerns that Iran maintains a chemical weapons program that it has failed to declare to the OPCW,” Ward said at an OPCW conference.

“The United States is also concerned that Iran is also pursuing central nervous system-acting chemicals for offensive purposes,” he added. He connected this with the general White House charge and theme that Iran and Russia had “enabled” Syria in attacking civilians with nerve agents, according to claims of officials in the West.

While a number of commentators acknowledged the sheer lack of evidence to back the claims — something that’s never stopped US officials from making the charge whether it was Iraq, Libya, or Syria — Ward merely cited historical information from the 1980s alleging Iran had transferred banned chemical munitions to Gaddafi’s Libya.

Of course, ironically the US had been supplying Saddam Hussein with chemical productions equipment and capability during that very period of the 1980s, according to recently unearthed CIA files. 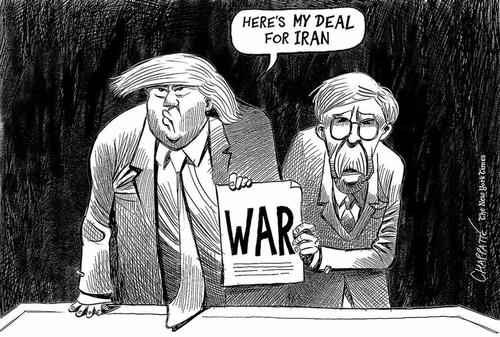 “How unfair it is for me to have food when millions of people, including pregnant women and children, don’t have any food because of corrupt people in my complicit media hiding what’s happening.” — Hunger striker Pamela Bennett SAN FRANCISCO — In Yemen, 18 million civilians are now at the brink of starvation, including 5 million children. The situation Read More…

The Globalist Agenda: A Conundrum Of The Current Political Season

The political story of our time is less about Hillary or Trump than what many believe is the destruction of our United States of America by shadow forces within, and outside, our government. A large part of that conversation centers on our role in the world of international politics including issues of national sovereignty versus Read More…

One Reply to “Here We Go Again: US Accuses Iran Of Hiding Chemical Weapons”