As bizarre metal towers mysteriously appear at entrances to bridges and tunnels all over New York, the project remains shrouded in secrecy. When pressed for details on the mystery structures by local news affiliate CBS2’s Dave Carlin, the MTA spokesman in charge of bridges and tunnels, Cedrick Fulton, simply replied, “I said no comment.”

The $100 million project includes 18 of these towers, which began to appear shortly after the Brooklyn Battery toll booths were taken down. The structures are being described as “decorative,” but a comment made by MTA chairman Joe Lhota suggests they are anything but.

Carlin: “Some of your own board members say they don’t know the specifics.”

Lhota: “The base of these new pieces that are going up include whatever fiber optics are necessary for those Homeland Security items.”

In other words, it’s anti-terror technology. Could that one day include facial recognition? We don’t know, and Lhota won’t say.

“I’m not at liberty to discuss that,” he told Carlin. 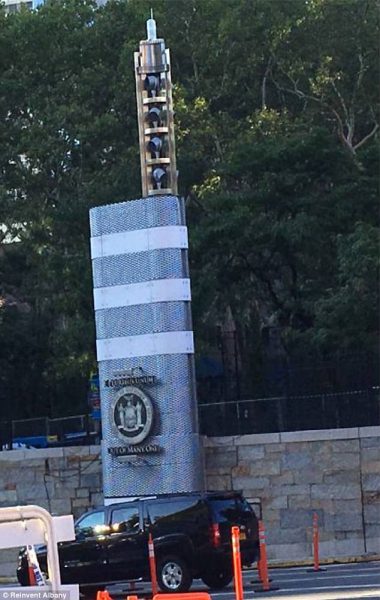 Even some MTA board members are concerned about how little information is available. “A lot of the board members felt they didn’t have all the details they would have wanted, myself included,” said New York City Transportation Manager Polly Trottenberg.

But an organization called Reinvent Albany has been working hard to shed some light on the details surrounding the structures. “It’s a bit mind-boggling that the MTA is approving $100 million for what appears to us to be big, decorative pylons,” says John Kaehny, Executive Director and founding board member of the watchdog organization. “What we’re asking for is transparency from the MTA.”

According to a press release from Governor Cuomo’s office, these “art deco” towers will “bring back public art aboveground.” Each structure will be covered in decorative artwork constructed with chainmail fabric, displaying a “wave effect.” All MTA bridges and tunnels will be equipped with LED lights that change color according to a “dawn to dusk” schedule, with “spectacular, multi-color light shows that will be visible for miles.”

But it’s not what’s on the outside of the buildings that’s important. The bright and colorful new “decorative” towers could actually be state-of-the-art surveillance centers, designed to identify every citizen that goes in and out of the city.  According to a press release announcing Cuomo’s New York Crossings Project, which is part of Harbor Lights:

“At each crossing, and at structurally sensitive points on bridges and tunnels, advanced cameras and sensors will be installed to read license plates and test emerging facial recognition software and equipment. These technologies will be applied across airports and transit hubs – including the Penn-Farley Complex – to ultimately develop one system-wide plan.”

And there’s no evidence that any of it has been approved. According to Reinvent Albany’s research:

“The MTA board has never seen a full project budget for Harbor Lights and has not voted on the project. According to Politico, the governor’s office says the New York Power Authority (NYPA) will pay for the project — not the MTA. Yet, according to board minutes from March and January of this year, the NYPA board was told that the MTA would repay NYPA for the costs of the project.” So no one actually knows where the money for Cuomo’s project is coming from.

The watchdog organization has testified twice to the MTA this month alone and has also filed a formal complaint with the Authorities Budget Office to investigate whether or not the MTA fulfilled their duty to fully examine and follow the proper steps to approve any and all contracts related to Governor Cuomo’s New York Crossings Initiative.

One particularly alarming section of the organization’s complaint to the ABO reads as follows:

“Based on MTA documents, we estimate the total combined cost of the components of NY Crossing will exceed over a billion dollars in public funds.

According to press accounts, public records, and public statements by MTA board members, Governor Cuomo proposed the New York Crossings Initiative with little or no review or comment by the MTA board. Based on our review of the minutes of the MTA full board and committee meetings since the governor’s October 5, 2016 announcement, we see no evidence that the MTA board reviewed or approved an overall budget for the New York Crossings initiative, or reviewed or approved budgets, or expenditure caps, for any of its component elements.” [emphasis added]

The only thing that is clear about Governor Cuomo’s Harbor Lights/NY Crossings project is that no clear information is being provided.

Out of the 18 towers slated to go up, a total of four have been completed. “That we know of,” said Kaehny, who added that a tower was scheduled to be erected today on the Queens side of the midtown tunnel. “There might be a tower going up as we speak,” he said.

Can CNN go a single week without cutting their live feeds when someone says something that doesn’t fit their narrative? Apparently not. Last week their live feed was mysteriously cut when a Congressman mentioned that many of the terrorism cases that the FBI is dealing with, are coming from refugees. Yesterday it happened again, as Read More…

Legacy of the Media President

“An Interesting transformation for the network journalist: the ability to get on the air, which was crucial to any reporter’s career, grew precisely as the ability to analyze diminished.”   The Powers that Be – David Halberstam It is no surprise to anyone that today’s political ideals have struggled to remain in the field of Read More…

UN war crimes investigators yesterday called on Israel to stop its snipers using lethal force against protesters in the Gaza Strip, as the anniversary approached of the start of demonstrations there, Reuters reported. The Commission of Inquiry said Israel should investigate the shooting of more than 6,000 people, far beyond the criminal inquiries it has announced into 11 killings. “The most Read More…