The United States is suffering from multiple institutional crises, all the signs of imperial decline. Homeless rates are growing, health care services are failing, and the education system has turned into a factory. According to the U.S. Department of Education there are currently 32 million adult Americans who can’t read, that’s 12% of the adult population, and a further 21% who read below a 5th grade level. The illiteracy rate among the U.S. prison population is a whopping 63%. These numbers have held steady for the past decade, and may even be ticking up. 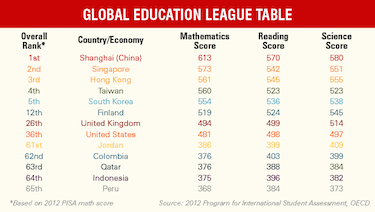 As the U.S. education system gears itself toward competing with the international market, it is focusing on test taking and white-collar skills. The lip-service paid to the STEM fields caused the country to stop focusing on literacy, self-learning, and basic reasoning. All three are vital factors for a healthy economy and civic participation.

In 2012 and 2013 two studies were conducted by the Organization for Economic Cooperation and Development, both of which found that U.S. adults below average literacy and numeracy skills compared to other industrialized countries. The studies ranked the U.S. 16th out of 23 countries in literacy proficiency, 21st in numeracy proficiency, and 14th in problem solving in technology-rich environments.

It wasn’t always like this, the U.S. education system once excelled at producing laymen who could perform like engineers. Every individual was taught basic survival skills, in the form of home-economics, and how to learn, in the form of analytical methods.

Very few people in our generation were even taught home-economics, most schools considered the courses to be unimportant and got rid of them in the 1980s. Sadly, those few who maintained them totally under-represented the importance of these classes. Most of us probably remember learning to bake banana-bread or stitching some Christmas stockings, but few of understand the purpose behind these classes. The U.S. education system was developed when the country wasn’t fully industrialized. The modern fantasy of easy living hadn’t become the norm, and there were many parts of the country that still lacked infrastructure that we consider “standard” today. In order to aid those families that lived off the unbuilt grid, the U.S. government created a system of education to turn each house-hold into a self-sufficient economy. Thus Home-economics.

Needed to learn how to raise food? No problem, the gardening classes dealt with that. Home maintenance and repair? Say hello to shop class. Food preservation, home health, child-care basics, and a hundred other skills to help the average house-hold live frugal lives were deployed everywhere in the country. This system was logical for the U.S. government because it allowed house-holds, and small communities, to subsist without massive government aid. Life wasn’t easy back then, but this process at least made difficult lives more comfortable.

The second thing the government did for education was to ensure that the classical liberal arts were taught in all schools. Let’s unpack some loaded terms here. Liberal arts were not what they currently are, a hodge-podge of disciplines intended to prepare a student for college and chewing on the grass-grown by colleges. Classical liberal arts were designed to provide an intellectual foundation for each student that they could then build their careers upon. It started with the Trivium – grammar, logic, and rhetoric. Grammar was the memorization of words in a systematic way. Wanted to know about botany? Start by learning the vocabulary. Logic was based on the Greek system to help an individual eliminate contradictions in what they were learning, it is the precursor to the scientific method. When formal logic is combined with the scientific method you get better results since both are intended to arrive at the truth by different means. Finally, rhetoric was the system by which people clearly communicated what they learned. This system worked because it taught people how to think CRITICALLY, a vital component to education that modern systems totally disregard.

Why focus on adult education and basic subsistence skills? It is a proven fact that a child’s education is most strongly influenced by their environment. Well educated adults are more likely to lead to well-educated children. Survival skills reduce the burden on governments because families, and thus communities, are able to provide a wide range of services to themselves. If the U.S. government is serious about bringing literacy rates back up it needs to consider looking into its own history.

Varun Bhaskar is editor-in-chief of View on the Ground: a small paper dedicated to covering the global energy crisis, climate change, and local resilience. He is a strong advocate of DIY, self-sufficiency, and humanization of the economy. He was formerly an defense/intelligence analyst at two think tanks in India, before returning to the US. He is strongly concerned about the unsustainability of modern life and is part of John Michael Greer's “Green Wizard” program.

Top Problems Of College Education In The 21st Century
October 23, 2018