According to the official narrative, the reason for the latest Gulf crisis in which a coalition of Saudi-led states cut off diplomatic and economic ties with Qatar, is because – to everyone’s “stunned amazement” – Qatar was funding terrorists, and after Trump’s recent visit to Saudi Arabia in which he urged a crackdown on financial support of terrorism, and also following the FT’s report that Qatar has directly provided $1 billion in funding to Iran and al-Qaeda spinoffs, Saudi Arabia finally had had enough of its “rogue” neighbor, which in recent years had made ideologically unacceptable overtures toward both Shia Iran and Russia.

However, as often happens, the official narrative is traditionally a convenient smokescreen from the real underlying tensions.

The real reason behind the diplomatic fallout may be far simpler, and once again has to do with a long-running and controversial topic, namely Qatar’s regional natural gas dominance.

Recall that many have speculated (with evidence going back as far back as 2012) that one of the reasons for the long-running Syria proxy war was nothing more complex than competing gas pipelines, with Qatar eager to pass its own pipeline, connecting Europe to its vast natural gas deposits, however as that would put Gazprom’s monopoly of European LNG supply in jeopardy, Russia had been firmly, and violently, against this strategy from the beginning and explains Putin’s firm support of the Assad regime and the Kremlin’s desire to prevent the replacement of the Syrian government with a puppet regime.

Now, in a separate analysis, Bloomberg also debunks the “official narrative” behind the Gulf crisis and suggests that Saudi Arabia’s isolation of Qatar, “and the dispute’s long past and likely lingering future are best explained by natural gas.”

The reasons for nat gas as the source of discord are numerous and start in 1995 “when the tiny desert peninsula was about to make its first shipment of liquid natural gas from the world’s largest reservoir. The offshore North Field, which provides virtually all of Qatar’s gas, is shared with Iran, Saudi Arabia’s hated rival.” 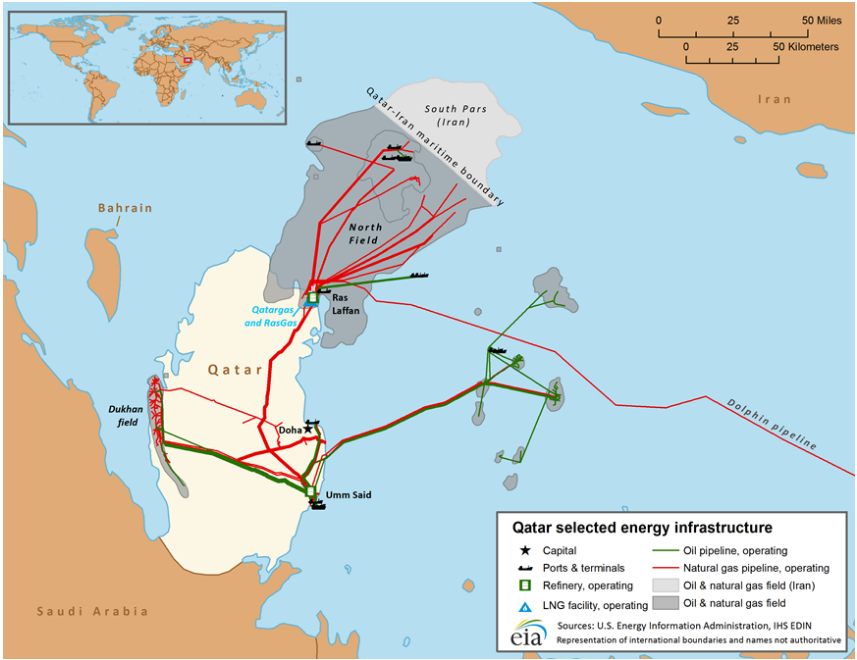 The result to Qatar’s finances was similar to the windfall that Saudi Arabia reaped from its vast crude oil wealth.

The wealth that followed turned Qatar into not just the world’s richest nation, with an annual per-capita income of $130,000, but also the world’s largest LNG exporter. The focus on gas set it apart from its oil producing neighbors in the Gulf Cooperation Council and allowed it to break from domination by Saudi Arabia, which in Monday’s statement of complaint described Qataris as an “extension of their brethren in the Kingdom” as it cut off diplomatic relations and closed the border.

In short, over the past two decades, Qatar become the single biggest natural gas powerhouse in the region, with only Russia’s Gazprom able to challenge Qatar’s influence in LNG exports. 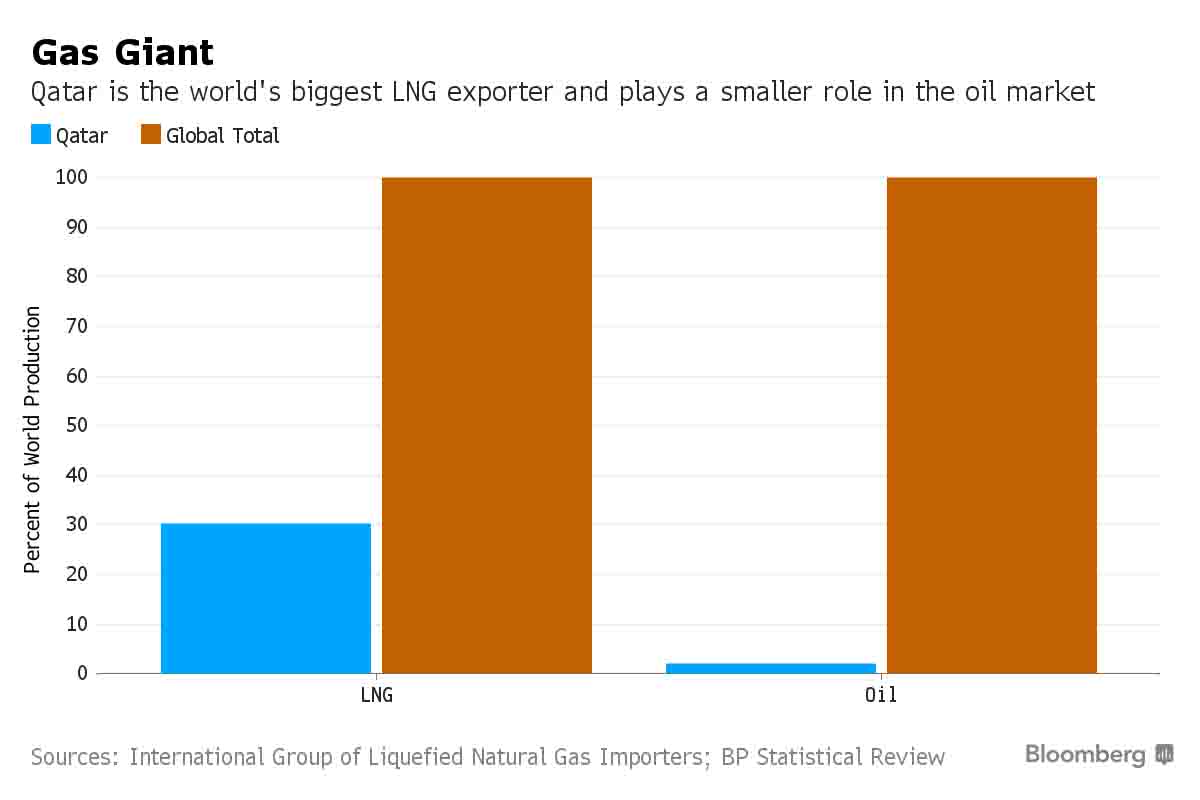 To be sure, Qatar has shown a remarkable ability to shift its ideological allegiance, with the FT reporting as recently as 2013, that initially Qatar was a staunch supporter, backer and financier of the Syrian rebels, tasked to topple the Assad regime, a process which could culminate with the creation of the much maligned trans-Syrian pipeline.

The tiny gas-rich state of Qatar has spent as much as $3bn over the past two years supporting the rebellion in Syria, far exceeding any other government, but is now being nudged aside by Saudi Arabia as the prime source of arms to rebels.

The cost of Qatar’s intervention, its latest push to back an Arab revolt, amounts to a fraction of its international investment portfolio. But its financial support for the revolution that has turned into a vicious civil war dramatically overshadows western backing for the opposition.

As the years passed, Qatar grew to comprehend that Russia would not allow its pipeline to traverse Syria, and as a result it strategically pivoted in a pro-Russia direction, and as we showed yesterday, Qatar’s sovereign wealth fund agreed last year to invest $2.7 billion in Russia’s state-run Rosneft Oil, even as Qatar is host of the largest US military base in the region, US Central Command. This particular pivot may have also added to fears that Qatar was becoming a far more active supporter of a Russia-Iran-Syria axis in the region, its recent financial and ideological support of Iran notwithstanding.

As a result of the tiny nation’s growing financial and political “independence”, its neighbors grew increasingly frustrated and concerned: “Qatar used to be a kind of Saudi vassal state, but it used the autonomy that its gas wealth created to carve out an independent role for itself,” said Jim Krane, energy research fellow at Rice University’s Baker Institute, quoted by Bloomberg.

Furthermore, Qatar’s natural gas output has been “free from entanglement” – and political pressure – in the OPEC, the oil cartel that Saudi Arabia dominates.

“The rest of the region has been looking for an opportunity to clip Qatar’s wings.”

And, as Bloomberg adds, “that opportunity came with U.S. President Donald Trump’s recent visit to Saudi Arabia, when he called on “all nations of conscience” to isolate Iran. When Qatar disagreed publicly, in a statement the government later said was a product of hacking, the Saudi-led retribution followed.”

To be sure, in a series of tweets, Trump himself doubled down on the “official narraitve”, taking credit for Qatar’s isolation (perhaps forgetting that a US base is housed in the small nation).

So good to see the Saudi Arabia visit with the King and 50 countries already paying off. They said they would take a hard line on funding…

…extremism, and all reference was pointing to Qatar. Perhaps this will be the beginning of the end to the horror of terrorism!

The cynics may be forgiven to assume that if Trump is tweeting that the reason for Qatar’s isolation is “to end the horror of terrorism”, even as the US just signed a $100+ billion arms deal with the single biggest supporter of terrorism in the world, Saudi Arabia, then indeed the Trump-endorsed “narrative” is to be dismissed outright.

Which again brings us back to nat gas, where Qatar rapidly emerged as the dominant, and lowest cost producer at a time when its neighbors started demanding the commodity on their own, giving the tiny state all the leverage. As Bloomberg adds “demand for natural gas to produce electricity and power industry has been growing in the Gulf states. They’re having to resort to higher-cost LNG imports and exploring difficult domestic gas formations that are expensive to get out of the ground, according to the research. Qatar’s gas has the lowest extraction costs in the world.”

Of course, with financial wealth came the need to spread political influence:

Qatar gas wealth enabled it to develop foreign policies that came to irritate its neighbors. It backed the Muslim Brotherhood in Egypt, Hamas in the Gaza Strip and armed factions opposed by the UAE or Saudi Arabia in Libya and Syria. Gas also paid for a global television network, Al Jazeera, which at various times has embarrassed or angered most Middle Eastern governments.

And, above all, “gas prompted Qatar to promote a regional policy of engagement with Shiite Iran to secure the source of its wealth.”

And here the source of tension emerged: because as Steven Wright, Ph.D. Associate Professor at Qatar University told Bloomberg, “you can question why Qatar has been unwilling to supply its neighboring countries, making them gas poor,” said Wright, the academic, speaking by telephone from the Qatari capital Doha. “There probably was an expectation that Qatar would sell gas to them at a discount price.”

It did not, and instead it took a step backward in 2005, when Qatar declared a moratorium on the further development of the North Field that could have provided more gas for local export, adding to the frustrations of its neighbors.

Qatar said it needed to test how the field was responding to its exploitation, denying that it was bending to sensitivities in Iran, which had been much slower to draw gas from its side of the shared field. That two-year moratorium was lifted in April, a decade late, after Iran for the first time caught up with Qatar’s extraction rates.

As Qatar refused to yield, the resentment grew.

“People here are scratching their heads as to exactly what the Saudis expect Qatar to do,” said Gerd Nonneman, professor of international relations and Gulf studies at Georgetown University’s Doha campus. “They seem to want Qatar to cave in completely, but it won’t call the Muslim Brotherhood a terrorist organization, because it isn’t. And it isn’t going to excommunicate Iran, because that would jeopardize a relationship that is just too fundamental to Qatar’s economic development.”

Whether nat gas is the source of the Qatari isolation will depend on the next steps by both Saudi Arabia and Iran. Saudi Arabia, along with the United Arab Emirates and Egypt – are all highly reliant on Qatari gas via pipeline and LNG.

According to Reuters, traders startled by the development, have begun to plan for all eventualities, especially any upsets to piped gas supplies from Qatar to the UAE. The UAE consumes 1.8 billion cubic feet/day of Qatari gas via the Dolphin pipeline, and has LNG purchase agreements with its neighbor, leaving it doubly exposed to tit-for-tat measures, industry sources and traders said. 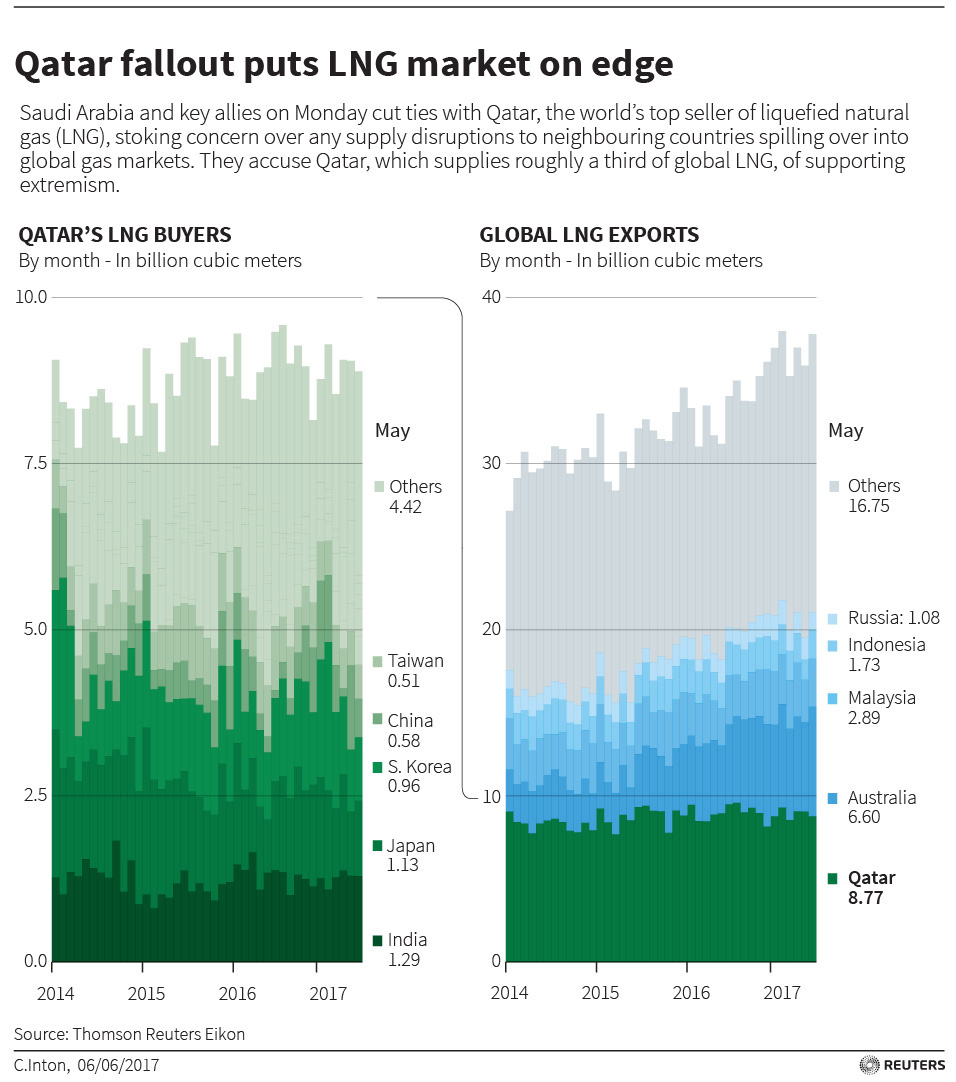 So far flows through Dolphin are unaffected but traders say even a partial shutdown would ripple through global gas markets by forcing the UAE to seek replacement LNG supply just as its domestic demand peaks.

With LNG markets in bearish mood and demand weak, the UAE could cope with Qatar suspending its two to three monthly LNG deliveries by calling on international markets, but Dolphin piped flows are too large to fully replace.

A drop off in Dolphin deliveries would have a huge impact on LNG markets,” one trader monitoring developments said.

And since it all boils down to who has the most leverage as this latest regional “balance of power” crisis unfolds, Qatar could simply take the Mutual Assured Destruction route, and halt all pipeline shipments to its neighbors crippling both theirs, and its own, economy in the process, to find just where the point of “max pain” is located.

Welcome to The Daily Wrap Up, a concise show dedicated to bringing you the most relevant independent news, as we see it, from the last 24 hours (2/10/21). As always, take the information discussed in the video below and research it for yourself, and come to your own conclusions. Anyone telling you what the truth Read More…

The U.N. refugee agency (UNHCR) says more than 440,000 internally displaced Syrians and about 31,000 of those who have fled abroad have now returned to their hometowns, the BBC reports. According to the BBC, “most of them have returned to Aleppo, Hama, Homs and Damascus with the aim of checking on their properties and finding out about Read More…

“So now the question becomes: how did Russia know to target African American voters, and especially in certain key states,” asked popular #Resistance pundit Amy Siskind in response to a New York Times article claiming Russian social media trolls targeted Sanders supporters and Black voters during the 2016 election. “I think we’ll get our answers in the coming months Read More…