The last time the FBI was found to have been surveilling radical Islamic terrorists in the Southwest was May 2015, when an undercover FBI agent was caught driving with and filming two armed Jihadis about to carry out an attack. The radicals were killed by police, while the FBI agent – on record encouraging the act – was released.

Five suspects who were arrested in a raid on a northern New Mexico compound have been taken into custody by the FBI after local prosecutors botched their case, resulting in the release of three of the individuals.

The defendants, Jany Leveille, 35, a Haitian national illegally present in the United States, Siraj Ibn Wahhaj, 40, Hujrah Wahhaj, 37, Subhanah Wahhaj, 35, and Lucas Morton, 40, are charged in a criminal complaint that was filed earlier today in the U.S. District Court for the District of New Mexico. The criminal complaint charges Jany Leveille with being an alien unlawfully in possession of firearms and ammunition in the District of New Mexico from Nov. 2017 through Aug. 2018. The criminal complaint charges the other four defendants with aiding and abetting Leveille in committing the offense, and with conspiring with Leveille to commit the offense. –KRWG

In other words, the feds have pinned firearms offenses on one of the women arrested at the compound – Jany Leveille, while the other four defendants – one of whom Police believe abducted and then ritualistically murdered his 4-year-old son on the property (and happens to be the son of a famous New York Imam), are charged with helping her. We didn’t note any charges connected to the dead child, Abdul-ghani Wahha. If convicted of all charges, each defendant faces a maximum of ten years in prison.

So according to the FBI: 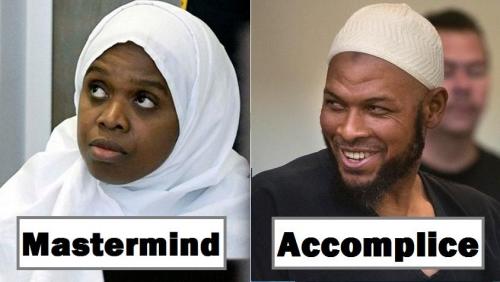 Eleven children were found on the property in a state of malnourishment and squalor, who local authorities say were being trained to commit acts of terrorism. Children from the compound told police that Jany Leveille, 35 – the partner of the dead boy’s father, Siraj Wahhaj, 40, “intended to confront ‘corrupt’ institutions or individuals, such as the military, big businesses, CIA, teachers/schools and reveal the ‘truth’ to these corrupt institutions or individuals.”

Police also found a “terrorist training manual” on the property:

The handwritten document contained “instructions for ‘The one-time terrorist,‘ instructions on the use of a ‘choke point,’ a location ‘called the ideal attack site,’ the ‘ability to defend the safe haven,’ the ‘ability to escape-perimeter rings,’ and ‘sniper position detection procedure,'” according to the court filing.

Some of the children at the compound told police that Morten allegedly “stated he wished to die in Jihad, as a martyr,” prosecutors said in the motion.

“At times, Jany Leveille would laugh and joke about dying in Jihad as would Subhanna Wahhaj,” according to the court document. –CNN

The FBI had been surveilling the compound for several months prior to the August 3 raid by the Taos County Sheriff’s Office – however they must not have been watching when the child was allegedly murdered.

Twe weeks after the raid, the compound was mysteriously destroyed by authorities with no explanation, while an RV central to the property in which the suspects and the children were living was seized.

NEW DEVELOPMENT: Authorities have partially bulldozed the #NMCompound – trailer that was the main dwelling on the property has been dragged out and seized. ammo/bulletproof vest/paperwork remain. @NBCNews pic.twitter.com/yGDV1I8wYa

The last time the FBI was found to have been surveilling radical Islamic terrorists in the Southwest was May 2015, when an undercover FBI agent was caught driving behind two armed Jihadis, filming them as they pulled up to a “Draw Muhammad” exhibit in Garland, Texas – ostensibly to attack the event. The would-be terrorists were shot dead on the spot by security guards, while the FBI agent – who encouraged one of the terrorists to “tear up Texas” in a text message, was arrested at gunpoint and later released.

Welcome to The Daily Wrap Up, a concise show dedicated to bringing you the most relevant independent news, as we see it, from the last 24 hours (2/9/19). As always, take the information discussed in the video below and research it for yourself, and come to your own conclusions. Anyone telling you what the truth Read More…

Viewed by academics as one of the most influential psychologists of the 20th century, Jerome Kagan ranked above Carl Jung (the founder of analytical psychology) and Ivan Pavlov (who discovered the Pavlovian reflex) in a 2002 American Psychological Association ranking of the eminent psychologists. He is well-known for his pioneering work in developmental psychology at Harvard University, where he has Read More…

How biased are the US media, really? This is a frequently asked question. The answer is – they are biased very much and they know how to instill the vision of things in a quiet and unobtrusive way. Here is an example to prove the point. “Defense Secretary Mattis Arrives at Only US Base in Read More…