After a heated election and inauguration weekend that was rife with tension, a waitress in DC received a very generous tip and a note with a heartwarming message of unity from a Trump supporter.

The waitress, Rosalynd Harris, said Jason White, a dentist from west Texas, and two of his friends came into Busboys and Poets on 14th Street in Northwest D.C. on Monday afternoon. The dentist apparently liked Harris’ smile because when they paid their lunch bill that came to $72.60, the customers left Harris a $450 tip – more than 600 percent of the bill.

In addition to the tip, White left Harris a message on his receipt that says:

“We may come from different cultures and may disagree on certain issues, but if everyone would share their smile and kindness like your beautiful smile, our country will come together as one people. Not race. Not gender. Just American. God Bless!” 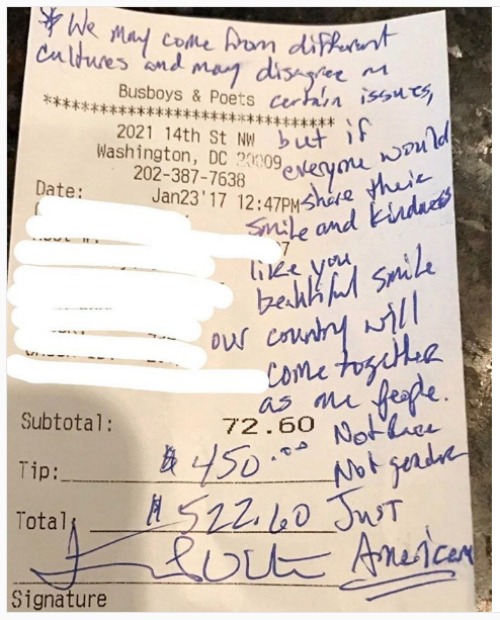 Harris said of the kind gesture:

“The simple fact that he didn’t want to create a scene, but just wanted to let me know that this was a great experience and this is what he hopes for people in general, it was very touching. It’s really amazing and it makes me want to go about my interactions with that kind of energy more often.”

“We may have different opinions and disagree on different issues, but the fact that he still looked at me as an equal and someone of value, it said something, like OK, not all hope is lost.

Never judge a book by its cover and always be open with people to experience something miraculous like that.”

Harvey Weinstein is the tip of the iceberg, his case is exposing how Hollywood has fostered and protected pedophiles for decades. (TFTP) Pedophilia in Hollywood, according to victims and those who expose it, is rampant and exists throughout the industry. Those who expose it are often tarred and feathered in the mainstream and the predators in Hollywood Read More…

Welcome to The Daily Wrap Up, a concise show dedicated to bringing you the most relevant independent news, as we see it, from the last 24 hours (8/29/18). “In a time of such obvious deceit and aggressive manipulation, not only by those who once sought our votes or our subservience, but today even by each Read More…

There have been two developments in the past month that illustrate clearly what is wrong with the White House’s perception of America’s place in the world. Going far beyond the oft-repeated nonsense that the United States is somehow the “leader of the free world,” the Trump Administration has taken several positions that sustain the bizarre Read More…