Yesterday my social media feeds were ablaze with people celebrating the latest new “bombshell” Russiagate revelation, which, as always, turned out to be nothing once the facts rolled in. Less than nothing, in fact, since Trump supporters everywhere are jumping up and down on ABC’s correction of an important part of its breaking coverage of the Flynn plea that it had misreported. The popular narrative on pro-Trump forums today is quite understandably that this is more vindication of their president in yet another example of the “fake news” biased reporting against him. Russiagaters gained no ground, and lost some.

Late last night, the US Senate passed the most drastic rewrite of America’s tax system since the Reagan administration, which is expected to mostly benefit the wealthiest Americans while further crippling the nation’s already broken healthcare system. It even includes a late addendum to allow oil drilling in the Arctic National Wildlife Refuge.

Hours after the tax bill passed while everyone was distracted by a bogus Russiagate story, “Trump and Flynn” is still trending on Twitter in the US. 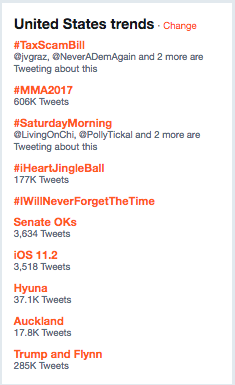 That’s right, Republicans are openly enacting trickle-up economics plans, an expansion of a continuing trend in which wealth is funneled to the wealthiest of the wealthy while ordinary Americans are squeezed tighter and tighter by inflation, wage stagnation, diminishing social programs, and the decimation of a quality job market by predatory corporate giants like Walmart and Amazon… and Democrats are still babbling about Russia.

The GOP is basically handing the Democrats a platform, saying “Look at us! We’re legislating wealth redistribution upward!” and judging from their actions Democrats are still basically saying “Hmm, but how do we beat these guys?? Keep going with the Russia thing I guess?”

This is after both parties in both houses gave Trump an even more over-inflated military budget than he’d already asked for, because it seems like the only things America can afford these days are bombs and tax breaks for billionaires. This is also after a recent CBS poll showed that a clear majority of Americans want the rich and large corporations taxed more, not less, and an NBC/Wall Street Journal poll showed that the tax bill is supported by a mere 25 percent of Americans.

This is all perfectly in line with the carefully choreographed dance the two parties have been doing for decades. The GOP shoves the nation in the direction of corporatist oligarchic tyranny while in power and the Democrats make a big show of putting up a very feeble resistance to it, and then when the Dems are in power they keep everything the Republicans did in place while continuing the march toward corporatist oligarchic tyranny a bit more subtly. No proportionate shove in the other direction is ever forthcoming from the Democrats, resulting in an overall movement to the corporatist right, which is why what now passes for the “left” in the United States is considered right-wing in most first world countries.

This is because Democratic politicians, like Republican politicians, have careers that are sponsored by donors who are wealthy enough to sponsor them. These donors expect favors, and they receive them. Take a look at the ongoing rants of top Dem donor Stephen Cloobeck if you want a perfect illustration of how this works; a plutocrat wants more plutocrat-friendly policies, and tells Democratic party leaders that they need to make this happen or he’s pulling funding.

So of course the Democrats have been pouring far more energy into Russiagate than they have into opposing the GOP’s march into plutocratic tyranny. One is completely inconsequential to their wealthy donors, and the other is ultimately their job to facilitate, not oppose.

There are many dangers to Russiagate, including complicity in the US power establishment’s cold war maneuverings and escalations which risk the life of every organism on earth, and another is that it distracts from the very real dangers that the Trump administration poses while fixating on nonsense instead. You know there would have been far more opposition on this tax bill had rank-and-file Democrats not been fixated on Russia hysteria this whole time.

You can’t focus on real problems and made-up Russia conspiracy theories at the same time, America. Republicans are going to keep getting away with making things cushier and cushier for the owners of powerful corporations at your expense while you’re fixated on the Putin decoy. Better sober up fast on your own, because the Democrats in Washington sure as shit aren’t going to help you.

From the not so ‘Independent’ to Fox News & CNN, mainstream media Has characterized Israel’s violent attack on Palestinian worshippers at a Holy Site in the most ridiculous fashion, proving the utter contempt these agencies hold for Palestinian life. This Friday hundreds of heavily armed Israeli occupation forces stormed the al-Aqsa Mosque Compound, attacking Palestinian Read More…

US Military Preparing For “Options” In Syria

Events are moving rapidly in Syria as Russian jets pound insurgent positions in Idlib Province and as the Syrian Army initiates a ground invasion which Damascus has described as coming in a “phased” approach.  The White House responded to the Syrian and Russian bombing campaign by vowing it would act “swiftly and vigorously” should chemical weapons be used, and a day ago Read More…

The Syria Strikes: A Conspiracy Theory

On the morning of April 4th 2017, Syrian President Bashar al-Assad, on the verge of a military victory against the terrorist insurgency in his country and on the eve of peace talks that would secure his position as president, decided to use chemical weapons he didn’t have against a target of no military significance in Read More…