Orlando, FL — Forty nine people have been killed and 53 injured in an Orlando nightclub shooting that occurred early Sunday morning, the city mayor said during a press briefing. The shooting is the deadliest in recent US history and the worst attack on US soil since 9/11.

“Today we’re dealing with something that we never imagined and is unimaginable,” city mayor Buddy Dyer said during the press briefing on Sunday. “It is with great sadness I share that we not have 20 but 50 casualties (dead), in addition to the shooter. There are another 53 …hospitalized.”

According to authorities, the shooter has been identified as 29-year-old US citizen Omar Mateen, US media reported. The CBS network added that the FBI is currently checking whether he was linked to extremists.

The shooter was of Afghan descent and had weapons training, Peter King, US congressman and chairman of the House subcommittee on counterterrorism and intelligence, told US media.

Politicians across the US are already using this tragic event to push their distorted agendas, with Texas Lieutenant governor Dan Patrick stooping to extraordinary lows, capitalizing on the fact the nightclub catered to the LGBT community. Hours after the shooting, Patrick, a devout anti-LGBT politician, tweeted “man reaps what he sows.”

“The one who sows to please his flesh, from the flesh will reap destruction,” the passage continues. Patrick, who’s made headlines recently over his nonsensical gender bathroom legislation, will undoubtedly be hung out to dry over his choice to make such a disgusting tweet.

Patrick has since pulled the tweet after heavy backlash, including from this author. However, predicting he would do so, we saved a screen grab of it. 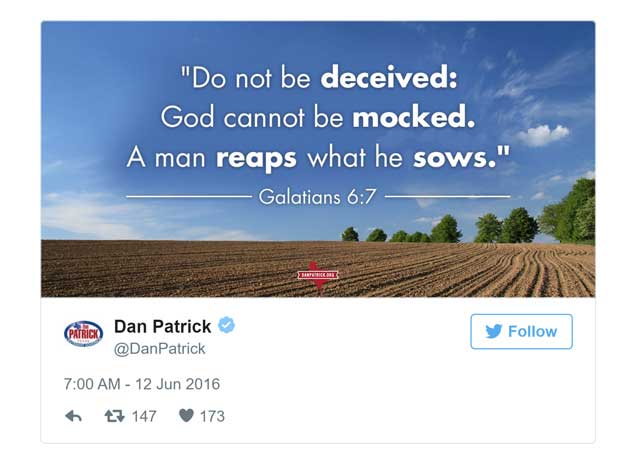 One can only imagine how the tragic deaths of these individuals will be used to further political agendas. If Patrick is any indication, Americans better hunker down — because things are about to get bad.

According to the Orange County Sheriff, the process of removing the victims from the club continues. Hospital officials told journalists during the briefing that some victims of the shooting are undergoing surgery, with a number of them in critical condition.

As Social Security And Medicare Go Bankrupt, US Gives $10.5 Million A Day To Israel

While the United States gives Israel around $10.5 million a day, reports indicate that Social Security and Medicare funds will soon be depleted. (TFTP) As the United States government admits that Social Security and Medicare services are going bankrupt and will both be completely depleted within the next 16 years, American taxpayers are giving around $10.5 Read More…

The U.S. Drug Enforcement Agency (DEA) just announced they will ban the popular pain relief supplement kratom by placing it on the Schedule 1 list, which denotes “no currently accepted medical use and a high potential for abuse” – the most restrictive classification under the federal Controlled Substances Act. This move to ban yet another Read More…

Rochester, NY — A video uploaded to Facebook last week is causing an uproar as it shows multiple Rochester police officers assault and pepper spray innocent bystanders for exercising their first amendment rights. As the video begins, a man inside his car is filming two officers on top of an apparent suspect. Becoming agitated with Read More…

One Reply to “Deadliest Mass Shooting in US History — 49 Dead, 53 Injured In Orlando Night Club Massacre”