After what has seemed like a non-stop barrage of bad news for crypto bulls from South Korea, we noted some cracks in the foundation of the anti-cryptocurrency push as the ministry of finance refused to support the ministry of justice’s exchange shutdown bill.

Tonight we get further clarification that the end of South Korean crypto trading is not nigh as Yonhap reports the various government ministries need more time and more consultations over the ministry of justice’s plan to ban crypto-exchanges.

Ministers reportedly seek a “soft-landing” considering the shock the measures may have on the market is an issue that can result in huge social, economic damage.

Additionally Yonhap notes that even if pursued, shutdown of exchanges would take some time as it needs discussion at parliament (it would take months or even years for a bill to become a law).

The result is a broad-based rally across the major cryptocurrencies… 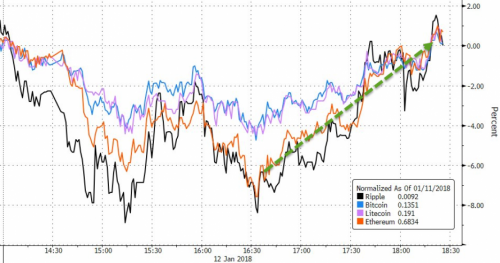 Tens of thousands of people filed an online petition, asking the presidential office to stop the clampdown against cryptocurrency trading.

South Korea is home to one of the world’s biggest private bitcoin exchanges, with more than 2 million people estimated to own some of the best-known digital currency.

Suspected US Drone Spotted by Russian Pilot in Syria

A camera installed inside the cockpit of a Russian fighter jet carrying out combat missions in Syria recorded the moment when a suspected U.S. Reaper Drone was seen flying close to the jet. “It is dangerous … if two sets of aircraft come into the same piece of airspace without very clear, laid-out protocols for Read More…

In Just The Last Two Weeks, Dozens Of Children In Iowa Have Vanished