On Independence Day, CNN thought it a good idea to tweet out quotes from notable figures in American history. One such figure was the 16th president of the United States, Abraham Lincoln. The corporate media giant quoted Lincoln as saying:

“Let them know the facts, and the country is safe.”

The tweet was interpreted to be a counterpunch to Donald Trump, whose war with the mainstream media has been raging as of late. However, any actual interpretation of the quote is moot because the quote itself is inaccurate.

Celebrate America and its freedoms this #IndependenceDay pic.twitter.com/PPpymSxnIy

Unfortunately for CNN, which sourced Newseum for the quote, critic and playwright Terry Teachout saw the tweet, and it struck him at an odd angle. In a tweet of his own, Teachout asked research group Quote Investigator — which is often cited by other mainstream publications — to look into it:

“This quote, though familiar, looks suspicious to me. Any thoughts?”

Three hours later, Quote Investigator responded by posting an image of text from an April 21, 1865, article from the Daily Intelligencer. In that text, President Lincoln’s words are quite clear:

“Let them know the truth, and the country is safe.”

Both articles were written in memory of Lincoln, who’d been assassinated just days before on April 15. And in that context, it’s important to examine Lincoln’s quote in its entirety, not just what CNN selectively — and, again, inaccurately — chose to print. The whole quote reads as follows:

“I have faith in the people. They will not consent to disunion. The danger is, they are misled. Let them know the truth, and the country is safe.”

Lincoln was the leader of a country that was literally tearing itself apart through civil war. The interviewer from the Boston Daily Journal noted that the president appeared “haggard and careworn” during the conversation. Not long after the interview, President Lincoln was dead.

So there’s really only two ways to look at this. Either CNN, with all its massive corporate resources, is still the most incompetent news organization on the planet, or it deliberately misquoted — again, out of context — a former president to use for political gain in a sparring match with a current one. 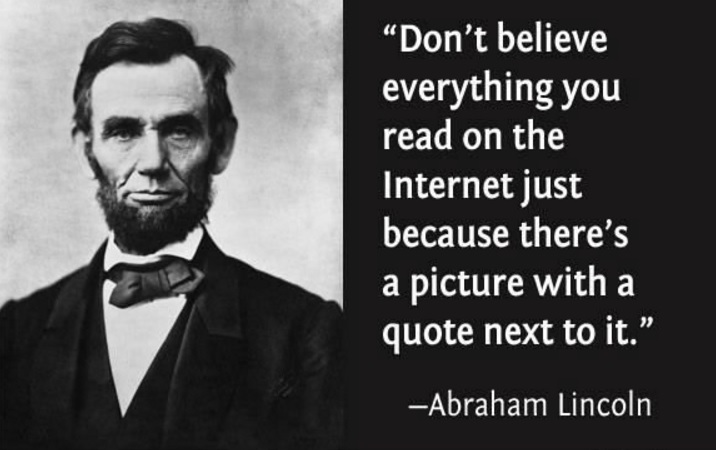 Of Hacktivism, Hackers And Leakers: Helping Re-Set The Bar Of REAL Journalism

In a world of slanted journalism that pervades not only mainstream media offerings but also the majority of “progressive” and “alternative” media, it is the hackers and leakers of vital information that are now providing a new and desperately needed return to real journalism. Recent examples of courage and risk in pursuit of full disclosure Read More…

The Grayzone Testifies At The UN – ‘Humanitarian Crisis In Venezuela: Propaganda vs. Reality’

As Western nations are being told to brace for more terror attacks like Manchester, mainstream media continues to simplify the narrative for public consumption, hoping that the general public will believe this is just a simple struggle between good and evil, black and white, right and wrong. There are some, however, who are telling the whole Read More…