This morning Hillary Clinton’s campaign general counsel, Marc Elias, confirmed what we all knew already, namely that Jill Stein is likely acting at the direction of the Clintons in her recount efforts in WI, MI and PA.  The discovery came after Elias posted a note to Hillary voters this morning on Medium confirming that they would participate in Stein’s recount efforts even though the Clinton campaign itself had decided against a recount because they had “not uncovered any actionable evidence of hacking or outside attempts to alter the voting technology.”  This approach seems to align perfectly with the strategy we laid out two days ago:

That said, since Jill Stein decided to act “completely independently” to waste the money of a bunch of donors the Hillary general counsel figures they might as well participate despite the fact that “the number of votes separating Donald Trump and Hillary Clinton in the closest of these states—Michigan—well exceeds the largest margin ever overcome in a recount.”

Because we had not uncovered any actionable evidence of hacking or outside attempts to alter the voting technology, we had not planned to exercise this option ourselves, but now that a recount has been initiated in Wisconsin, we intend to participate in order to ensure the process proceeds in a manner that is fair to all sides. If Jill Stein follows through as she has promised and pursues recounts in Pennsylvania and Michigan, we will take the same approach in those states as well. We do so fully aware that the number of votes separating Donald Trump and Hillary Clinton in the closest of these states—Michigan—well exceeds the largest margin ever overcome in a recount. But regardless of the potential to change the outcome in any of the states, we feel it is important, on principle, to ensure our campaign is legally represented in any court proceedings and represented on the ground in order to monitor the recount process itself.

Of course, Clinton’s failure to find any evidence of vote tampering was not for a lack of trying. Elias also highlighted the five steps they took, including having “lawyers and data scientists and analysts combing over the results to spot anomalies that would suggest a hacked result,” to come up with some reason to launch their own election challenge.  Why is it so hard to believe that Hillary simply lost the election?

First, since the day after the election we have had lawyers and data scientists and analysts combing over the results to spot anomalies that would suggest a hacked result. These have included analysts both from within the campaign and outside, with backgrounds in politics, technology and academia.
Second, we have had numerous meetings and calls with various outside experts to hear their concerns and to discuss and review their data and findings. As a part of this, we have also shared out data and findings with them. Most of those discussions have remained private, while at least one has unfortunately been the subject of leaks.

Third, we have attempted to systematically catalogue and investigate every theory that has been presented to us within our ability to do so.

Fourth, we have examined the laws and practices as they pertain to recounts, contests and audits.

Fifth, and most importantly, we have monitored and staffed the post-election canvasses—where voting machine tapes are compared to poll-books, provisional ballots are resolved, and all of the math is double checked from election night.During that process, we have seen Secretary Clinton’s vote total grow, so that, today, her national popular vote lead now exceeds more than 2 million votes.

But we thought Hillary was outraged by Trump’s comment that he wouldn’t blindly accept the outcome of the election.  Well this is awkward.

For those who missed it, here is what we posted yesterday about the recount effort in Wisconsin.

It’s official, the Wisconsin Election Commission just confirmed that a recount petition has been filed by Jill Stein just ahead of the 5pm deadline.

The Wisconsin Elections Commission has received recount
petitions from both the Stein and De La Fuente campaigns https://t.co/ksJ7dP35zm

Per a press release posted to the Commission’s website, the recount will start late next week after the appropriate personnel have been assembled and after Stein pays the recount fee.  While no expectations were given for a completion date, the Commission noted that the federal deadline for all recounts is December 13th.

“The Commission is preparing to move forward with a statewide recount of votes for President of the United States, as requested by these candidates,” Haas said.
“We have assembled an internal team to direct the recount, we have been in close consultation with our county clerk partners, and have arranged for legal representation by the Wisconsin Department of Justice,” Haas said. “We plan to hold a teleconference meeting for county clerks next week and anticipate the recount will begin late in the week after the Stein campaign has paid the recount fee, which we are still calculating.”

The last statewide recount was of the Supreme Court election in 2011.  At that time, the Associated Press surveyed county clerks and reported that costs to the counties exceeded $520,000, though several counties did not respond to the AP’s survey.  That election had 1.5 million votes, and Haas said the Commission expects the costs to be higher for an election with 2.975 million votes.  “The Commission is in the process of obtaining cost estimates from county clerks so that we can calculate the fee which the campaigns will need to pay before the recount can start,” Haas said.  The Commission will need to determine how the recount costs will be assessed to the campaigns.

The state is working under a federal deadline of December 13 to complete the recount. As a result, county boards of canvassers may need to work evenings and weekends to meet the deadlines. “The recount process is very detail-oriented, and this deadline will certainly challenge some counties to finish on time,” Haas said. 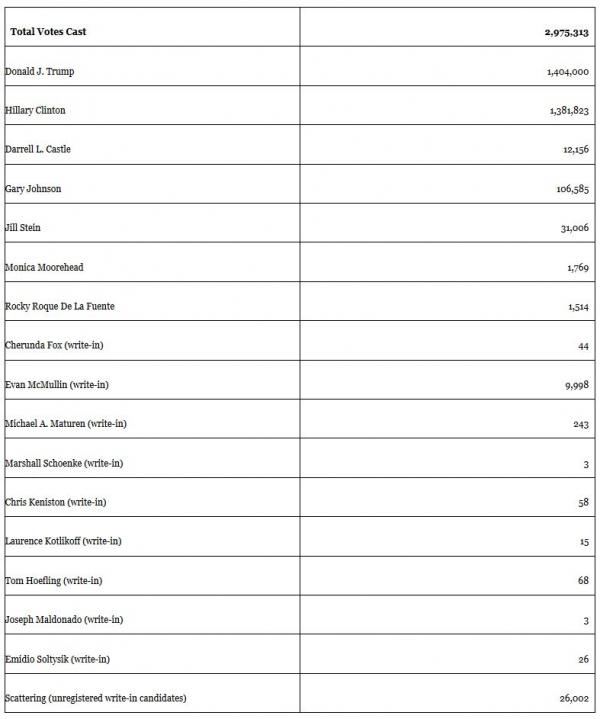 While we haven’t yet heard Trump’s thoughts on the recount, Jill seems to be very enthusiastic.

Finally, below is Stein’s official petition filed with the Wisconsin Election Commission which includes all of her “evidence” of Russian election tampering from extremely credible and impartial sources like The New York Times, Chicago Tribune and NBC News.

Among other things, Stein’s petition cites the hacking of Arizona and Colorado voter registration databases, hacking of the DNC and John Podesta’s emails and high levels of absentee voters as the justifications for her recount request.

In August 2016, it was widely reported that foreign operators breached voter registration databases in at least two states and stole hundreds of thousands of voter records.
Around that time, hacker infiltrated the e-mail systems of the Democratic National Committee and a campaign official for Democratic presidential candidate Hillary Clinton.  These e-mails were then published online.

On October 7, 2016, the Department of Homeland Security (DHS) and the Office of the Director of National Intelligence on Election Security issued a joint statement regarding these breaches.  The statement reads, in pertinent part, as follows:  “The U.S. Intelligence Community (USCI) is confident” that there have been “recent compromises of e-mails from US persons and institutions, including from US political organizations.”  It also states that “[t]here thefts and disclosures are intended to interfere with the US election process” and that “similar tactics and techniques [have been used] across Europe and Eurasia…to influence public opinion there.”  In the statement, DHS urges state election officials “to be vigilant and seek cybersecurity assistance” from that agency in preparation for the presidential election.

In Wisconsin, there is evidence of voting irregularities in the 2016 presidential election that indicate potential tampering with electronic voting systems.  Specifically, there was a significant increase in the number of absentee voters as compared to the last general election.  This significant increase could be attributed to a breach of the state’s electronic voter database.

The well-documented and conclusive evidence of foreign interference in the presidential race before the election, along with the irregularities observed in Wisconsin, call into question the results and indicate the possibility that a widespread breach occurred.

Of course, while Stein reiterates numerous allegations of foreign hacking that were well circulated, yet never officially linked to a specific source, before the election, her petition doesn’t offer a single shred of actual, tangible evidence that the election results in Wisconsin were in any way tampered with.

Even her so-called “computer science expert” offers up nothing more than baseless theories on “plausible” explanations of how the Wisconsin results may have been hacked.  Sure, because it’s just so impossible to believe that a flawed candidate with multiple ongoing FBI criminal investigations may have simply lost the election.

Perhaps Hillary could give us her opinion on whether or not questioning election results by throwing around wild accusations of vote tampering by rogue foreign states qualifies as a “direct threat to our democracy.”  Certainly, she had very strong feelings about Trump refusing to blindly accept the election results during the last debate.

While reports on Thursday suggested US aid to Pakistan could be cut by $255 million to $400 million, officials on Friday suggest the figure is to be much larger, with one administration official say $2 billion is “in play.” Which isn’t to say that the cuts will be all of $2 billion, but rather that this is the Read More…

In the United States, the Fourth Estate, also known as the Fourth Power or the fourth branch of government, has always been a popular label for the media’s role in a free society. But in the state of Virginia, legislators want to remove that power from the press by shielding police officers from public scrutiny. Read More…

Joining me today is Christian Westbrook, also known as Ice Age Farmer. Today we are discussing a very serious problem that not only appears to be on the horizon for Americans, and much of the world, but one that very well might have been planned, orchestrated, or at the very, least allowed to happen. This Read More…

2 Replies to “Clintons Confirm Participation In Recount Plan, Despite No “Actionable Evidence Of Hacking””