What we know so far…

Update (2:30 pm ET): Trump told reporters aboard Air Force One that he is considering cancelling an Illinois rally planned for tonight, and that there will be a “different tone” after Pittsburgh shooting.

Gab.com’s policy on terrorism and violence have always been very clear: we a have zero tolerance policy for it. Gab unequivocally disavows and condemns all acts of terrorism and violence. This has always been our policy. We are saddened and disgusted by the news of violence in Pittsburgh and are keeping the families and friends of all victims in our thoughts and prayers.

We refuse to be defined by the media’s narratives about Gab and our community. Gab’s mission is very simple: to defend free expression and individual liberty online for all people. Social media often brings out the best and the worst of humanity. From live streamed murders on Facebook, to threats of violence by bombing suspect Cesar Sayoc Jr. that went unaddressed by Twitter, and more. Criminals and criminal behavior exist on every social media platform.

Shortly after the attack, Gab was alerted to a user profile of the alleged Tree of Life Synagogue shooter. The account was verified and matched the name of the alleged shooter’s name, which was mentioned on police scanners. This person also had accounts on other social networks.

Users are prohibited from calling for the acts of violence against others, promoting or engaging in self-harm, and/or acts of cruelty, threatening language or behaviour that clearly, directly and incontrovertibly infringes on the safety of another user or individual(s). We may also report the user(s) to local and/or federal law enforcement, as per the advice of our legal counsel.

Information Disclosed for Our Protection and the Protection of Others.

We cooperate with government and law enforcement officials or private parties to enforce and comply with the law. We may disclose any information about you to government or law enforcement officials or private parties as we, in our sole discretion, believe necessary or appropriate: (i) to respond to claims, legal process (including subpoenas); (ii) to protect our property, rights and safety and the property, rights and safety of a third party or the public in general; and (iii) to stop any activity that we consider illegal or legally actionable activity.

Update (1 pm ET): Live network coverage of Saturday’s shooting has concluded, but updates about the situation are still trickling in as police around the country react to the incident. In New York City, the NYPD is deploying additional officers to Jewish centers and synagogues throughout the city following an active shooter situation at a Pittsburgh synagogue.

Police said there are “multiple casualties” after reports of an active shooter at Tree of Life synagogue in Pittsburgh Saturday morning. A suspect is now in custody. Heavy weapons teams, including the officers from the Critical Response Command and the Strategic Response Team, will patrol Jewish houses of worship across the city. The NYPD noted that there is no current threat, according to ABC.

Update (12:15 pm ET): While police have yet to confirm the identity of the suspect, who was identified at the scene as 46-year-old Robert Bowers, images of a suspected social media account that may belong to Bowers have surfaced, and as one might imagine, they are replete with anti-semitic rhetoric.

While police haven’t confirmed the veracity of the acount, the likelihood of there being two 46-year-old anti-semites from Pittsburgh named Robert Bowers seems like…a stretch.

Shortly before the incident began, a man believed to be the shooter posted “screw your optics, I’m going in” on his gab account, suggesting that he needed to act before a Jewish organization brought in more refugees… 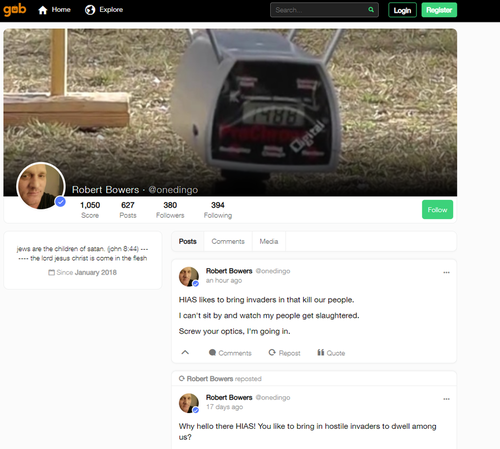 …Notably, the man said he didn’t vote for President Trump…

…and that he never owned a MAGA hat… 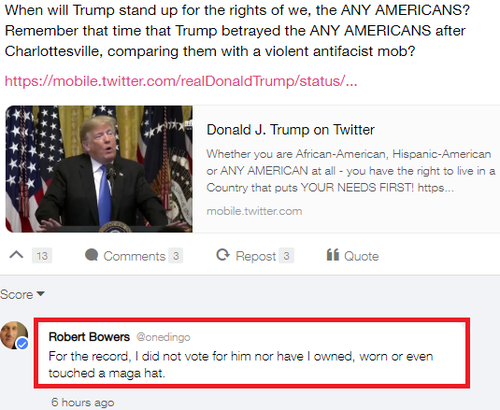 …the account-holder posted pictures of his guns… 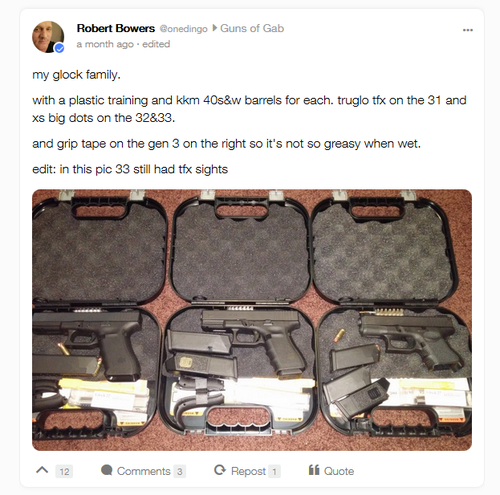 …He also accused Trump of being a “globalist”…

…Oddly, his gab account was last archived 14 hours ago… 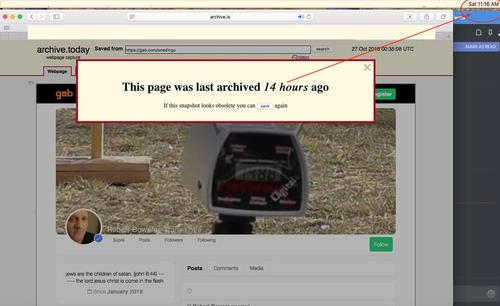 …which suggests whoever archived it wanted people to see the posts…

…As one twitter user pointed out, the shooter is a nazi terrorist who hated Trump…

Posts from the suspected Pittsburgh shooter Robert Bowers. He hated Trump and thought Trump was controlled by Jews. This monster is an unhinged anti-Semitic terrorist. pic.twitter.com/sjb2k6ucwb

President Trump answered questions from reporters around 12:45 pm. Here are a few headlines from his statement:

Update (11:40 am ET): As police check the identity of the middle-aged suspect, here’s a recap of what we know so far…

Update (11:35 am ET): Police have cleared the synagogue with a robot and are now seeking to clear it for bombs with a canine.

CNN reported that the synagogue has, in the past, been targeted with anti-semitic graffiti like swastikas. According to scanner reports, three officers were wounded in a gun-battle with the suspect. The FBI has been notified and Press Secretary Sarah Huckabee Sanders said the White House is “continuing to monitor” the situation.

NBC News reported that a bris ceremony was taking place when the shooter barged in. Shabbat services had been scheduled for later that morning. While earlier scanner reports said as many as 11 were dead on arrival, multiple media reports say at least 8 people have died. The Jewish Federation of Pittsburgh said there were between 80 and 100 people inside during the shooting.

Update (11:15 am ET): Police have the shooter in handcuffs and are in the process of clearing the synagogue. According to scanner reports, at least 11 people have been tagged “dead on arrival.”

Here’s the scene from a few blocks away:

#BREAKING: Suspect has surrendered. He is injured. Here is the scene just a few blocks away from the synagogue. At least 8 people killed @KDKA pic.twitter.com/AwhjC3iyH4

At least four people have died and a cop has been shot in the wrist. The suspect is crawling out of the building and communicating with the SWAT team.

According to police, the suspect’s name is Robert Bower (though this hasn’t been confirmed yet by police). He is 46 years old. He reportedly shouted “all Jews must die” at police after being subdued. The suspect was officially in cuffs as of 11:13 am ET. He was described as wearing blue jeans and a green jacket.

More bodies are reportedly being brought out. Police have also found a “military style” package on the first floor.

With the country still on edge from the flurry of more than a dozen attempted mail bombings of prominent Democratic political figures this past week, as many as eight people have been killed after a gunman opened fire during Shabbat services at a synagogue in Pittsburgh’s Squirrel Hill neighborhood. The shooter, who is armed with an AK-47, has taken members of the congregation hostage, according to Pittsburgh’s CBS affiliate station. 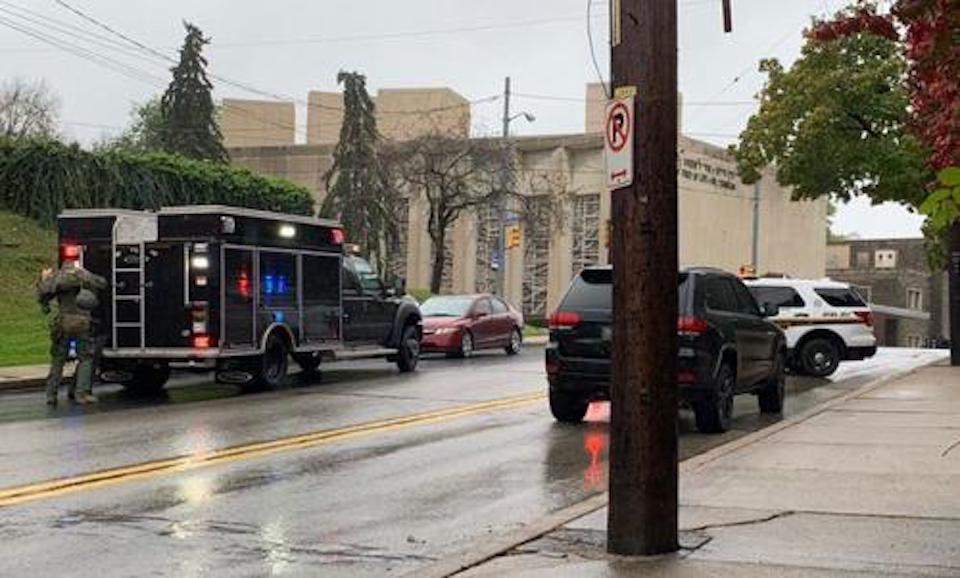 Officers were forced to hide behind their cars after arriving at Tree of Life Congregation, which is located on the corner of Wilkens and Shady Avenues, as the gunman opened fire on them. At least 4 have been confirmed dead, and scanner reports suggest the total could already be seven or eight. According to one report, the gunman is holed up on the third floor of the synagogue and is engaged in a gun battle with members of the SWAT team.

As one YouTuber who put the scanner feed online noted, “we’re listening to a terrorist attack in real time.”

Here are some excerpts from the scanner courtesy of RT:

Details of dramatic police standoff with the shooter are emerging via police radio broadcast on the Broadcastify website. An officer at the scene has told his colleagues over the police radio that there are “four down in the atrium.” Another one said “I’ve got one alive.”

“We need armor,” one police officer is heard saying, while another one requested to “open up the back for rescue.”

Saturday is Shabbat in the Jewish faith, and the shooting reportedly took place during a crowded prayer service. According to one local reporter, Tree of Life has one of the largest congregations in the city.

Oh no. No no no. This is Saturday, Shabbat, the busiest day of the week at a synagogue. Tree of Life is one of the most congregated in Pittsburgh. Please no. https://t.co/q0UgkNkLTs

According to the Daily Mirror, the area around the Tree of Life Congregation Synagogue and the area surrounding it have been sealed off.

#BREAKING: We are on our way to Wilkins Avenue for reports of a reported active shooter at the Tree of Life Synagogue. @KDKA is headed to the scene. Avoid the area. pic.twitter.com/Xmp5Iv54IM

One purported witness said she saw “15+” police cars speeding toward the synagogue.

There was just a man who opened fire in the synagogue down the street from my job. We’ve seen 15+ police cars drive by.

Locals have been asked to avoid the area. Nearby Carnegie Mellon University is reportedly on lockdown.

ALERT: There is an active shooter in the area of WILKINS and Shady. Avoid the area. More info will be released when it is available.

Elizabeth Parris, the CEO of Bioviva USA Inc, has become the very first human being to successfully, from a biological standpoint, reverse the age of her white blood cells, thanks to her own company’s experimental therapies. Bioviva utilizes intramural and extramural peer-reviewed research to create therapies for age-related diseases (Parkinson’s, Alzheimer’s, cancer, heart-disease), and now, they have Read More…

Scientists Empirically Examine Whether “Cleanliness” is Next to “Godliness”

Scientists at the University of Essex released a study in the journal of Social Psychological & Personality Science that studied the sociocultural habits of 135 college students–in conjunction with neuroimaging studies in the laboratory–in order to examine the relationship between biological cleanliness, health, analogical thought-process, neurosis, and religion.  As the old adage goes, “Cleanliness is next Read More…

If the Shooting of Dallas Police Surprises You, You Haven’t Been Paying Attention

Five police officers were killed and six were injured in Dallas yesterday when snipers opened fire during a protest of the recent police killings of Philando Castile and Alton Sterling. This mass shooting was a despicable act of murder. It was also blowback. “Blowback” is a term generally reserved for foreign policy. It refers to Read More…