The rumblings that Special Counsel Mueller’s Russia investigation is perilously compromised by political bias are about to grow a whole lot louder.

Just a couple of days after it was revealed that FBI veteran, Peter Strzok, was removed from Mueller’s team due to the discovery of anti-Trump text messages exchanged with a colleague (whom he happened to be having an extra-marital affair with), and hours after the WSJ editorial board called for Mueller to step down for being “too conflicted”, Judicial Watch has released emails obtained via FOIA that reveal another agent and a Mueller deputy, Andrew Weissmann, praising former Acting Attorney General Sally Yates’ efforts to defy a direct order from President Trump on the enforcement of his travel ban executive order.

“I am so proud. And in awe. Thank you so much. All my deepest respects.” 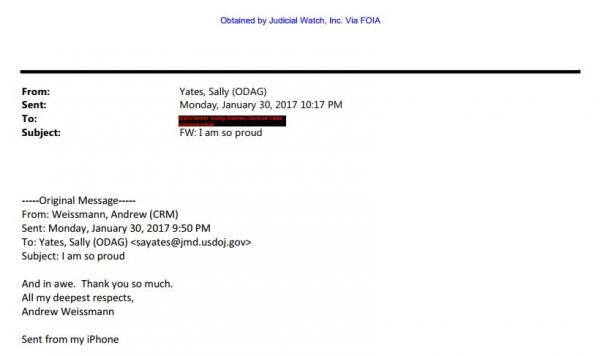 The email from Weissmann came exactly 1 hour after Yates was relieved of her duties with the Department of Justice by President Trump for refusing to enforce his travel ban executive order.  Here was our summary of the firing and the White House’s official statement on Yates’ dismissal:

That “mutiny” did not last long. At 9:16pm on Monday, President Trump announced the firing of the acting attorney general, Sally Yates, who defied him just three hours earlier on his migrant-travel ban urging the DOJ not to follow his executive order, saying she “has betrayed the Department of Justice.”

Statement on the Appointment of Dana Boente as Acting Attorney General

Ms. Yates is an Obama Administration appointee who is weak on borders and very weak on illegal immigration.

It is time to get serious about protecting our country. Calling for tougher vetting for individuals travelling from seven dangerous places is not extreme. It is reasonable and necessary to protect our country.

Tonight, President Trump relieved Ms. Yates of her duties and subsequently named Dana Boente, U.S. Attorney for the Eastern District of Virginia, to serve as Acting Attorney General until Senator Jeff Sessions is finally confirmed by the Senate, where he is being wrongly held up by Democrat senators for strictly political reasons.

“I am honored to serve President Trump in this role until Senator Sessions is confirmed. I will defend and enforce the laws of our country to ensure that our people and our nation are protected,” said Dana Boente, Acting Attorney General.

Meanwhile, as we pointed out last summer (see: Does Mueller’s Team’s Democratic Bias Confirm Gingrich’s “Time To Rethink” Warning?), Weissmann, to our complete ‘shock’, donated more than $4,000 to Obama’s presidential campaign in 2008 and $2,000 to the DNC in 2006.  Of course, Weissmann was not alone in putting his hard-earned money behind Democratic candidates…as Heavy noted, there seems to be a pretty consistent theme to which party Mueller’s agents seem to prefer…

Andrew Goldstein: According to Fox News, “Goldstein contributed a combined $3,300 to Obama’s campaigns in 2008 and 2012”

James Quarles: Donated thousands of dollars to the campaigns of Hillary Clinton and Barack Obama. He has also donated money recently to other Democrats, including Friends of Chuck Schumer and two other Democrats. He has a lengthy donation history dating back years. He did donate to two Republicans over the years, however.

Elizabeth Prelogar: A former law clerk to Justics Ruth Bader Ginsburg and Elena Kagen, gave $250 to Hillary Clinton in 2016, according to FEC records. She also gave $500 total to Obama for America and the Obama Victory Fund 2012.

Brandon Van Grack: gave small amounts to ActBlue, an effort to raise money for Democrats, and to a Democratic candidate for Congress in 2012. In 2008, he gave about $286 to Barack Obama.

Finally, we leave you with Judicial Watch President Tom Fitton’s assessment of this latest revelation:

“This is an astonishing and disturbing find. Andrew Weisman, a key prosecutor on Robert Mueller’s team, praised Obama DOJ holdover Sally Yates after she lawlessly thwarted President Trump.  How much more evidence do we need that the Mueller operation has been irredeemably compromised by anti-Trump partisans? Shut it down.”

Mueller Indicts 13 Russians, 3 Companies For Interfering In US Election

Shortly after noon on Friday, U.S. Special Counsel Robert Mueller announced an indictment of 13 Russian nationals and three Russian entities, accusing them of interfering in the 2016 presidential election and operating fake social media accounts. In the indictment announced on Friday – the first criminal case to accuse Russians of seeking to influence the outcome of Read More…

Cannabis May Already be Genetically Modified

“For the first time in human history, tomorrow’s generation is predicted to die younger because of today’s food system.” – Generation Food Never before in the history of the human race have future generations been uncertain about the security of their food source due to the actions of their predecessors. The world is seeing an unprecedented Read More…

Posted on May 16, 2017 Author Brandon Turbeville

The United States government and the Western corporate media are doing everything they can to continue to prop up the disproven narrative that Bashar al-Assad launched a chemical attack against civilians in Khan Sheykhoun. After having their story debunked repeatedly, the corporate media keeps coming back for more, even despite having a terrorist confessing to participating Read More…