“Disarm the people – that is the best and most effective way to enslave them.” – James Madison

Today one finds that the government approaches civil rights and medical activists like a standing army. Raiding homes of these outspoken political pioneers on whatever charge can be conjured up. They enter with tactical vengeance and all hands on deck to take down these “enemies of the state” who’s only crime was exercising their constitutional rights. It would seem a message is being sent to the masses – Do not resist, and fall in line.

An activist and Marine Corps veteran named Adam Kokesh was arrested back in 2013, on state drug and weapons charges. Adam was spearheading a peaceful Independence Day march in Washington D.C. to protest the violation of our right to bear arms. This was publicly cancelled late in May. On the morning of the fourth, calling it an act of civil disobedience, he continued to make a video showing himself loading a licensed shotgun on a street in D.C. This is his right under the second amendment of the constitution but violates local mandate. He took no other action besides exercising the right to free speech and left the area. A week later a multitude of armed forces, using a battering ram, broke down the door of his residence, using flash grenades and excessive force. Only upon their entry did the police find the alleged drugs of which Adam and his roommates claim to be unaware. Kokesh’s radio show issued a press release claiming that extreme tactics were used:

“The officers used a battering ram to knock in the door after two knocks, and did not announce that they had a warrant. Immediately after breaking down the door, a flash bang grenade was deployed in the foyer. Numerous police vehicles, including a light armored vehicle and two low-flying helicopters barricaded Adam’s street. More than 20 armored SWAT team members surrounded the house, as well as a number of detectives, and plainclothes officers. Assault rifles were aimed on all members of the team as they were 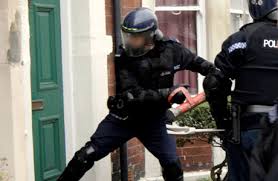 handcuffed without being told why they were detained. Masked and armored police in full ‘Storm Trooper’ gear flooded in and ransacked the residence.”

This type of hyper-police-state crack down, on what are now being labeled “domestic terrorists,” for attempting to spread Truth and exercise their constitutional rights, has seen a rapid increase in the last three years; all rising on the heels of the radical Islam media hype. The US has witnessed a complete overhaul in its military doctrine, both foreign and domestic. War, as the most profitable venture in the elitist handbook, has now essentially become a forgone conclusion, as the US once again begins to go tit-for-tat with Russia in a renewed arms race.

More than ever, the general population is slowly being swayed away from the belief that the constitution is still important. One by one our rights are being taken away under the guise of progress. As extreme as his methods may have been, Adam was straight forward about his actions being non-violent and was fighting for the rights of the American people, just as he did while serving our country in the military. Despite how one may feel about his protest, he was nonetheless fighting for what he believed was his right, and point of fact, is his right.

It may be hard for some to see his actions as constitutionally just, as we have been conditioned to see civil disobedience as wrong. Yet it is the act of openly disobeying laws one finds to be unjust, and by definition is non-violent. What other direction can an average citizen take when confronted with the loss of constitutional rights? This position we find ourselves in feels all too familiar: 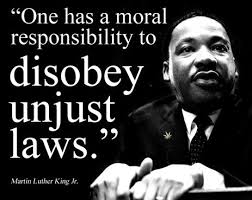 The loss of rights, taxation without representation and unlimited supreme authority. American’s are searching for ways to make peaceful change, in this country rife with political abuse and injustice, but those options are being eliminated before our eyes. We must do all in our power, as the people of this once great nation, to stand behind those that have the courage to rise in the face of oppression. To support those who put their own freedoms on the line for the sake of others’, and collectively resurrect this country back to a state of liberty and justice for all.

The New York Times reported on October 22 that the United States has “just over 240,000 active-duty and reserve troops in at least 172 countries and territories,” which is a staggering total. But in an intriguing revelation the Times reported that there are a further 37,813 troops deployed “on presumably secret assignment in places listed simply as ‘unknown.’ The Pentagon Read More…

The ‘Dehumanizing’ & Controlling Effects Of Mask-Wearing & Did US Gov Actually Seize Voting Servers?

Welcome to The Daily Wrap Up, a concise show dedicated to bringing you the most relevant independent news, as we see it, from the last 24 hours (11/14/20). As always, take the information discussed in the video below and research it for yourself, and come to your own conclusions. Anyone telling you what the truth Read More…

St. Louis, Missouri — Three plaintiffs have been awarded $17.5 million in damages caused by Monsanto and three other companies for negligence in the production of PCBs. A jury voting 10-2 in St. Louis found Monsanto, Pfizer, Solutia, and Pharmacia must pay the plaintiffs and assessed an additional $29 million in punitive damages against Monsanto Read More…