In the latest in a series of protests against the North Dakota oil pipeline project, overnight an estimated 400 protesters clashed with police who fired tear gas at the scene of a similar confrontation last month. The protesters mounted the Backwater Bridge and attempted to force their way past police in what the Morton County Sheriff’s Department initially described as an “ongoing riot.” Protesters say the pipeline threatens water resources and sacred tribal lands. 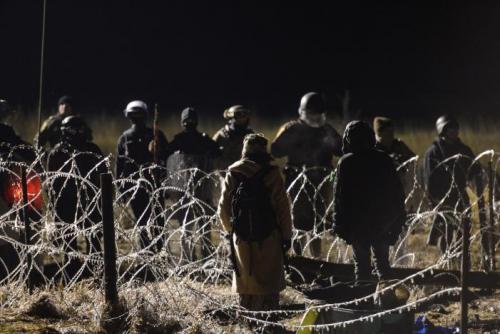 According to Reuters, one arrest had been made by 8:30 p.m. local time, about 2 1/2 hours after the incident began 45 miles (30 miles) south of Bismark, the North Dakota capital. About 100 to 200 protesters remained after midnight. 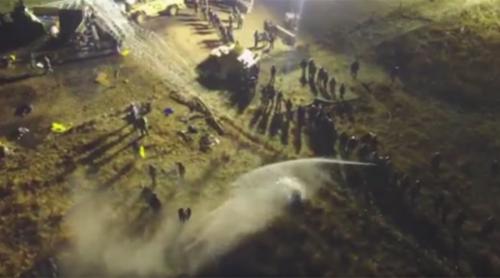 The Backwater Bridge has been closed since late October, when activists clashed with police in riot gear and set two trucks on fire, prompting authorities to forcibly shut down a protesters encampment nearby. 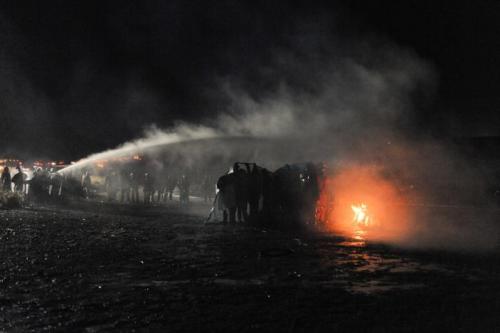 The Morton County Sheriff’s Department said officers on the scene of the latest confrontation were “describing protesters’ actions as very aggressive.”

Demonstrators tried to start about a dozen fires as they attempted to outflank and “attack” law enforcement barricades, the sheriff’s statement said. Police said they responded by firing volleys of tear gas at protesters in a bid to prevent them from crossing the bridge. 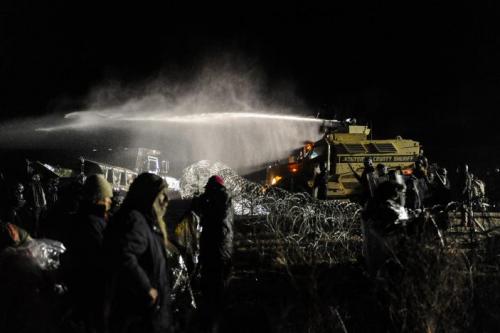 Activists at the scene reported on Twitter that police were also spraying protesters with water in sub-freezing temperatures and firing rubber bullets, injuring some in the crowd. A total of 167 demonstrators have been injured according to a medic on site, as cited by Indigenous Rising Media. The police were reportedly targeting demonstrators’ heads and legs.

Seven people have been hospitalized for severe head injuries. Three of those injured are reportedly elders of the Standing Rock Sioux tribe. 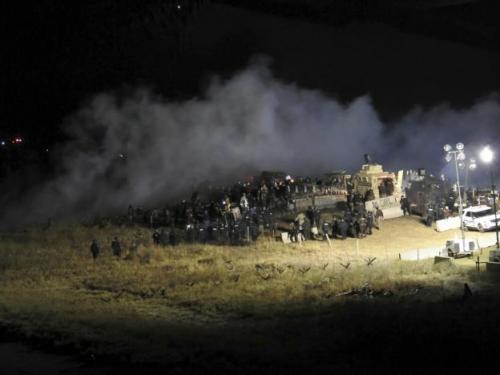 “There’s been no signs of violence on the side of the [water] protectors. We’ve seen some folks being injured…it really does feel like a warzone, and it doesn’t feel like we’re in America in 2016,” a protester told Indigenous Rising Media, calling the situation “very scary.” 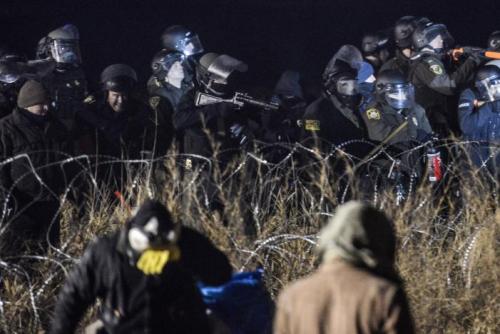 Police did not confirm those reports, but later said protesters had hurled rocks, striking one officer, and fired burning logs from slingshots.

The clashes began after protesters removed a truck that had been on the bridge since Oct. 27, police said. The North Dakota Department of Transportation closed the Backwater Bridge due to damage from that incident.

The $3.7 billion Dakota Access project has been drawing steady opposition from Native American and environmental activists since the summer. Completion of the pipeline, set to run 1,172 miles (1,185 km) from North Dakota to Illinois, was delayed in September so federal authorities could re-examine permits required by the Army Corps of Engineers.

Plans called for the pipeline to pass under Lake Oahe, a federally owned water source, and to skirt the Standing Rock Sioux Reservation by about half a mile. Most of the construction has otherwise been finished.

The Standing Rock tribe and environmental activists say the project would threaten water supplies and sacred Native American sites and ultimately contribute to climate change. Supporters of the pipeline, owned by Energy Transfer Partners, said the project offers the fast and most direct route for bringing Bakken shale oil from North Dakota to U.S. Gulf Coast refineries and would be safer than transporting the oil by road or rail.

(ANTIWAR) Following up on yesterday’s report that the Pentagon is likely to recommend a significant deployment of US ground troops to Syria by month’s end, Defense Secretary James Mattis confirmed that the US, as well as NATO as an alliance, are preparing to escalate the fight against ISIS in both Iraq and Syria. Mattis played up Read More…

Why Was this Natural Medicinal Substance Just Banned by the DEA?

If you’ve been keeping up with alternative media outlets the past couple weeks, you probably know that the DEA just classified kratom, a tropical deciduous tree with leaves used for various medicinal purposes (1), a Schedule 1 substance. This puts it in the same class as heroin (2). Vendors are already struggling to import it, and Read More…

6 Years Ago Today, The US Helped Murder Gaddafi To Stop The Creation Of Gold-Backed Currency

Six years ago today, the West took it upon itself to use NATO to overthrow Libyan leader Muammar al-Gaddafi — not for any humanitarian threat to civilians as had been repeatedly claimed — but because his planned roll-out of a new currency to be used across Africa posed a palpable existential threat to central banks Read More…